An inside glimpse of an often misunderstood country 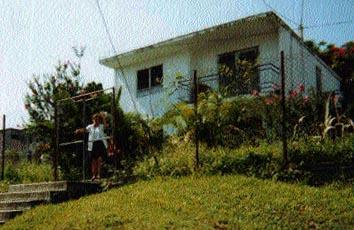 The current dynamic of U.S.-Cuba relations leads to a very narrow depiction of the island that lies just ninety miles south of Florida. Castro, communism, cigars, “boat people,” and Elian are apparently sufficient for high school textbooks and the mainstream media to characterize Cuba. In any case, it is a rare occasion that Cuba is granted the slightest acknowledgement in the U.S. unless it involves some sort of conflict. In June of the past summer, I was lucky enough to travel to Cuba for a short but very fulfilling and educational ten days. I went with a non-profit group based out of San Francisco called Global Exchange. Global Exchange arranges “reality tours” in various countries that intend to provide trips that venture beyond shallow and cheap tourist traps. Though it is illegal for U.S. citizens to travel to Cuba, Global Exchange got a license from the State Department allowing us to go legally.

There is no location more in need of a reality tour than Cuba. Fifty years of distorted Cold War views have left many people in the U.S. with a fuzzy and vague conception of “how things are down there” that is based in principle rather than fact.

The tour I went on (of the many tours that go to Cuba) was called “Cuba at a Crossroads.” As the name implies, the trip’s main focus was to detail how Cuba dealt with the fall of the Soviet Union and how it will deal with future challenges.

Cuba’s economic situation since 1989 can be characterized as no less than a protracted recession. The reason for this is that 85 percent of Cuba’s foreign trade was with the Soviet Union. Thus, as the Berlin Wall was falling, so were Cuba’s exports and gross domestic product (75 percent and 35 percent respectively).

In addition to losing its economic lifeblood, Cuba’s survival has been and still is threatened by the economic embargo imposed by President Kennedy more than thirty years ago. The embargo has prevented necessary food and medicine from reaching the island by prohibiting trade between U.S. companies and the Cuban government, deterring investment from other countries, and preventing loans from being granted by international banks. This period of economic crisis was officially dubbed the “Special Period” by the government. From this vantage point, it is easier to understand why my trip was structured as it was.

Most of my trip was spent in Cuba’s capital city, Havana. Home to over two million inhabitants, Havana is more laid back and comfortable than comparably sized cities in the U.S. and Europe. Based on the 50s style architecture and cars, Havana’s atmosphere, sights, and sounds seem to be preserved in the past. The exceptions include the newer hotels and (non-U.S.) cars that serve tourists only.

Tourism is Cuba’s number one industry, and it is not difficult to figure out why. Havana’s proximity to beautiful beaches and virtually non-existent crime rate make it an attractive stay for people from all over. Anyone can feel safe at all hours of the night walking alone down all streets of the city. The people are extremely nice and personable as well. However, sometimes this is only used for the purpose of selling the unsuspecting tourist some “real” cigars or rum.

In Havana it is impossible to escape the sound of music, which compliments the visual beauty of the city perfectly. If the music did not guide us to a good club or party, we only had to ask any random person walking down the street.

One of the most appealing aspects of Havana is how it has preserved its more historical aspects. This preservation has been the product of a concerted effort on the part of the Cuban people and government. Our group was told by one urban planner that the guiding philosophy of municipal development is “Heritage is not for sale.” Historic mansions once owned by Cuba’s former upper class have been preserved and are now used as public facilities by teenagers. Also, foreign businesses that wish to cash in on Cuba’s tourism industry must abide by the rules that have been set by the city government. Foreign investors sit down with urban planners with a scale model of the city to determine where a proposed building would fit in best.

Along with historical buildings and land, the Cuban government has also barred investment in education and health care, both of which are state-run. The Cuban health care system puts to rest all myths about the “inability” of governments to provide quality health care to its entire people for free. Even World Bank President James Wolfensohn praised the Cuban government, saying, “I think Cuba has done—and everybody would acknowledge—a great job on education and health” (Inter Press Service, 4/30/01). What’s more—in October of last year, Britain sent several advisors to Cuba in order to study its health care system with the idea of learning from it.

My group received an introduction to the Cuban health care system while visiting the city of Santa Clara. The Cuban system is organized on three levels. The first level is the family/community clinic that is within walking distance of all residents it serves. The second level is the polyclinic, which deals with emergencies, x-rays, and other more complex operations. The highest level is the large hospital, which deals with invasive surgeries and long-term care units. The decentralized structure of the Cuban health care system enables it to work very efficiently. However, the U.S. sanctions regime has made it difficult to get access to certain necessary medicines and equipment.

Venturing away from Havana into the provinces allowed my group to experience Cuba more authentically since the tourism industry is not big in the countryside. In Santa Clara, we visited a music school for high school students, a cooperative farm, hospitals, and an assisted living center for seniors. The people in Santa Clara are the warmest and most friendly group I have ever encountered. They were all eager to tell us about their country and ask questions about ours.

Members of my group wanted to learn about Cuba’s political situation. We had all heard the stories emanating from Cuban exile groups in Florida about the suffering endured by the island’s people under the yoke of Communist dictatorship. In many cases, this being no exception, reality is in stark contrast to opinion. It is obvious to the common observer that the people of Cuba live their lives to the fullest extent with what resources are available to them.

There are certain aspects of Cuba’s political system that should be changed. For example, the only news source that people not working in the tourism industry have access to is Granma, which is run by the government and very self-congratulatory. Freedom of speech and association are also limited to a certain extent. However, the human and civil rights record in Cuba is exceptional compared to Columbia, which is considered a “democracy” by elites and policy makers.

Cuba is a beautiful country in every sense of the word. Its people, beaches, streets, music, and smells overload the senses. One glance at a street corner and the people standing on it reveals why Ernest Hemingway loved the country so much.

Cuba is passionate and inspiring at every level. The only part of the trip that saddened me, besides leaving, was the fact that my government chooses to maintain and strengthen an antiquated policy of trying to isolate and economically strangle Cuba. I became more and more ashamed as it was revealed to the group how much the embargo hinders the country from functioning in its full potential. In a world where most third-world nations struggle to keep their populace fed and sheltered, Cuba is a beacon of light. I will never forget
my experiences and fully intend on returning.

For more info on Global Exchange, go to http://www.globalexchange.org. 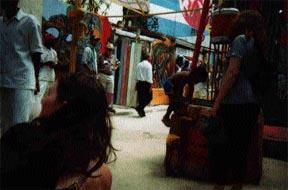 Callejon de Hamelin, a community whose murals were painted by famous artist Salvador Gonzales, who happens to be walking through the picture in the white shirt. (Jesse Heath) 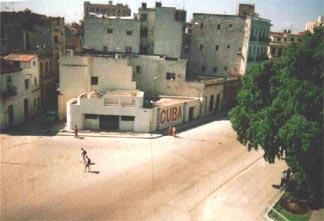