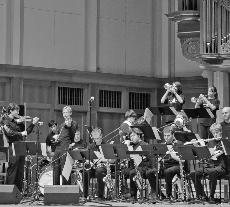 Who would have guessed that lyrics such as “ba-doo-bop-do-do” could bring together people from the “Greatest Generation” all the way to Generation Y’ers – and beyond? Given what happened during Lawrence’s Jazz Celebration Weekend Nov. 6 and 7, apparently a few finger-snapping beats are really all it takes to bridge just about any generational gap.
Singer Steve March Tormé kicked off the weekend at 7:30 p.m. Friday, Nov. 6 with his show “Tormé Sings Tormé” featuring the Lawrence Faculty Jazz Band. Steve Tormé is the son of the late Mel Tormé, famous jazz vocalist and contemporary of the likes of Nat King Cole and Rosemary Clooney. However, Steve March Tormé spent most of his childhood with his stepfather Hal March, actor and host of the then-famous “The $64000 Question.” It was not until Hal March passed away that Steve March Tormé reconnected with his biological father and even performed a few numbers with him.
In his Friday performance, Steve March Tormé managed to find a balance between paying tribute to his father and using his own vocal talents to make the songs his own – a tough feat given the varied expectations of a highly diverse audience.
Some audience members could be heard reminiscing about the black-and-white Mel Tormé movies they had watched in their childhood, like Frank Sinatra’s “Higher and Higher.”
Others grew up in an age when Tormé’s movies were not as widely known, though his importance to the jazz scene had been established.
Finally, there were the 20-somethings who had little idea who Mel Tormé was but were there to see their professors shine on instrumental segments or to watch their friends in the Hybrid Ensemble back up Steve March Tormé on numbers like the famous “Christmas Song,” co-written by Mel Tormé.
By showing slides of old family photos in the background and taking interludes between songs to narrate some of the little-known stories of Mel Tormé’s life and career, Steve March Tormé assured Mel Tormé fans they would not be let down.
These pictures and stories also helped younger folks understand what the big deal was surrounding Mel Tormé. Certainly, learning that he wrote the sophisticated “(I Was) Born to Be Blue” at age 19 convinced those just being introduced to him that he was a man of talent, as did the photos of him with Judy Garland, Benny Goodman and Colin Powell.
Having taken care of the Mel Tormé question, Steve March Tormé also took care of the natural question of whether he himself had talent.
Steve March Tormé made each song his own, performing classics such as “It Don’t Mean a Thing (If It Ain’t Got That Swing)” and “Blue Moon,” which Mel Tormé had covered.
Steve March Tormé did not feign to be Mel reincarnated, but rather rested on the laurels of his own – at times ethereal – voice, boundless energy and frequently self-deprecating sense of humor to engage the audience. The fact that he now lives in Appleton with his wife and two kids did not hurt the audience’s connection with him, either.
Having freed his audience of all other concerns, Steve March Tormé was able to draw in his audience members to a place of unity, a place where all that mattered was the excitement of the sudden tempo change or the wild percussion solo.
In that place, the fingers of several gentlemen freely snapped to the soulful “Comin’ Home Baby.” A wife freely wrapped her arm around her husband during the touching “The Folks Who Live on the Hill.” The hands of Lawrence students and older Appleton community members freely connected in handshakes at the end of this unforgettable experience.
Yet even after that show Friday night, the Jazz Celebration Weekend continued to draw connections between people. Saturday night featured a concert by the Wisconsin Homegrown Jazz Quintet, a group that Director of Jazz Studies Fred Sturm pulled together.
The group featured his son Ike Sturm on bass, as well as four outstanding musicians from around the state.
There were ongoing educational sessions throughout the weekend, allowing the masters of jazz to share their skills not only with each other, and not only with Lawrence students, but also with an even younger set of aspiring musicians.
Fred Sturm told Scene, “We’ve hired six jazz educators from the state to serve as Jazz Weekend educational clinicians. Patty Darling, LU alumnus and director of the LU Jazz Band, Kurt Dietrich of Ripon College, Matt Buchman of UW-Stevens Point, David Cooper of UW-Platteville, Marty Robinson of UW-Oshkosh, and singer Todd Buffa of Green Bay will coach more than 1,000 visiting middle school, high school, and collegiate instrumental and vocal ensemble students attending the fest on Saturday.”
Thus, for everyone from the legendary Mel Tormé to the hoards of youth just getting started, jazz did its thing this past weekend. 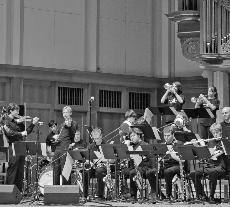