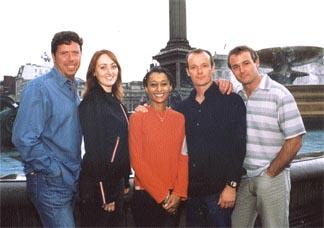 For many years now Lawrence University’s freshman class has been given a unique opportunity: a chance to work with a Shakespearean troupe of actors known as Actors from the London Stage. This year was no exception.This year’s ACTER troupe was involved in a variety of workshops that helped to expand upon the freshman class’s study of a Shakespearean play through the freshman studies program. Who picks what play the students study? How do the actors adapt the play for their group?

Luckily, amongst the group that came this year with ACTER was Suzanne Packer, graduate of the University of Warwick and actor in charge of publicity for this ACTER tour. She was kind enough to agree to an interview and answer some of these questions.

Packer was educated in theatre studies and dramatic arts and has been involved with the ACTER group since its 1997 production of Measure for Measure.

When asked how she became involved with the group, Packer explained how and why they pick the actors each year. “The way ACTER works, you are usually suggested for the group by someone else who has already had a connection with ACTER. Because of the nature of the job, you pretty much have to be quite multi-tasking. It’s not just about being able to deliver your role, you also have to be able to work well in the group and take on the role, sometimes of director, or make decisions about stage and about costuming. So, roles usually come with recommendation,” said Packer.

ACTER is associated with Notre Dame University and works with them to arrange the national tour, on which Lawrence is a stop. Each year, a new production is shown. But how does the play get picked? “I think that decision is taken out of our hands and made by the administrators. Notre Dame is actually our host, and they, I believe, make that choice, and in which sequence the plays are done.”

Before the tour, quite a bit of preparation goes into the play. The group was slated for five and a half weeks of preparation, but plans changed after the terrorist attacks of Sept. 11. “The practice schedule changed after the disaster on the eleventh. It held us back from what was scheduled because we couldn’t get out of the country and couldn’t get into this country, so we ended up just trying to use that time as productively as possible.”

Even after the performance is ready to go, adaptations must be made for each stage. Because of the touring procedure and the different spaces available for the performance, ACTER comes in before the workshops and performance times are scheduled. “We come in and do a technical rehearsal. If the stage is particularly wide or deep sometimes we have to adjust the sight lines. Some venues we can’t stand in the same way because the audience won’t be able to see. And it’s those kind of things we have to adjust for each school.” They arrive the day of the performance and make quick changes, spending only around three hours adjusting the show.

Each school presents new challenges to the ACTER group. “They can be incredibly varied, which for us is more fulfilling because it is more challenging. I suppose our main goal is to approach everything as an actor. We try to make sure to get students out of their chairs, embodying the characters instead of just reading the lines that they say. It’s a workshop with a difference. If it’s anything like the classes students normally have then I think we have failed, because we realize that students don’t normally get to act out when studying a play, so we just try to give them that new launching point. That’s the wonderful thing about Shakespeare, is that the character come alive so easily and are certainly as rich as real human beings.”

When asked what was next for the program, Packer was unsure, but guaranteed it would be a wonderful experience for the upcoming freshman class.