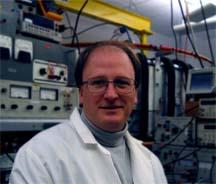 Professor Matthew Stoneking was issued a $178,000 grant so he and his students can advance their reasearch in the confinement of plasma.
David Stultz

Professor Matthew Stoneking was issued a $178,000 grant so he and his students can advance their reasearch in the confinement of plasma. (Julien Poncet)

Lawrence associate professor of physics Matthew Stoneking recently secured a $178 thousand grant from the National Science Foundation over the next three years for the study of the confinement of plasma. Plasma, the fourth state of matter, is an ionized gas or a “gas” of pure electrons. (Ions are atoms or molecules that have either a positive or a negative charge as a result of the removal or addition of one or more electrons.)

The magnetic field is 400 times more powerful than the magnetic field of Earth and is fed by 450 amperes of electricity. (For some idea of how much that is, the circuit for a room in the average house is only about 20 amperes).

In order to spread the magnetic field over the torus evenly, large wires are wrapped around the torus 96 times to evenly apply the current. The torus is called the Lawrence Non-neutral Torus and is located in room 044 in Science Hall.

The grant provides the funds for Stoneking and a group of his students to do several things. The first order of business is to rebuild the torus, which was originally a donation from the University of Wisconsin-Madison in 1997. It weighs one thousand pounds and has a five-foot diameter and three-centimeter-thick aluminum walls.

Such thick walls are necessary because there is an incredibly strong vacuum inside the torus, which keeps the electrons from slamming into various atoms that exist in atmospheric air. When evacuated, the pressure inside the torus is less than one billionth of sea level Earth atmosphere.

The grant also provides funds for hiring students to assist in research and to help present findings at conferences. The grant will fund collaboration between Stoneking and his colleagues at the University of California at San Diego.

Using the current torus, past experiments have succeeded in keeping the plasma contained for 20 milliseconds (or two one hundredths of a second). Stoneking estimates that with the new torus, the quality of the vacuum will be increased by a factor of 100 and that the magnetic field will be five times stronger. This improvement will produce confinement times of up to one second.

Practical applications of plasma physics include nuclear fusion, a reaction in which two isotopes of hydrogen fuse together into an isotope of helium and release protons and heat. Fusion energy produces no harmful waste, uses a virtually inexhaustible source of fuel (the hydrogen comes from water), and is incredibly efficient in the conversion of matter to energy.