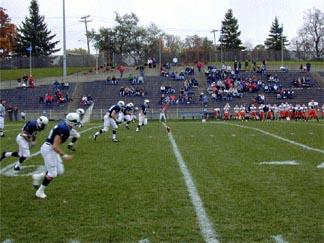 The Vikings lost their game to the Carroll College Pioneers last Saturday at the Banta Bowl in front of 1150 Homecoming spectators.With the score 27-13 late in the second quarter, Lawrence made a push when Junior running back Josh Graham rushed three plays in a row for 20 yards, resulting in a Vikes touchdown, cutting the deficit to just seven points. That, however, was as close as the Vikings would get.

Carroll answered with a touchdown of their own with only 0:36 on the first-half clock to increase their lead to 34-20. Carroll then scored two more touchdowns in the second half to the Vikings one. The Pioneers got the best of the Vikings 48-27.

The play of the game itself was very erratic. Lawrence had more possession than Carroll (31:26-28:34), and five more first downs (25-20), but Carroll managed to come up with 321 passing yards to Lawence’s 263. Another, and perhaps more important, reason Lawrence lost last Saturday was penalties. The Vikings only had one more penalty than Carroll, but Lawrence’s 10 total penalties resulted in a loss of 127 yards, to Carroll’s 69 yards.

Despite the unbalanced nature of the game, many Vikings turned in outstanding performances. Sophomore wide receiver Zach Michael caught 3 of Lawrence’s 4 total touchdowns, including a 50 yard bomb thrown by Sophomore quarterback R.J. Rosenthall in the second quarter.

Rosenthall threw all 263 passing yards, with 16 completions out of 34 attempts and one pass picked off for an interception. Graham displayed excellent skill with 154 yards total rushing. Graham also scored a touchdown.

The Vikings will play an away game against Monmouth (4-1) this Saturday and will return to the Banta Bowl on Nov. 3 to play Ripon (3-2).