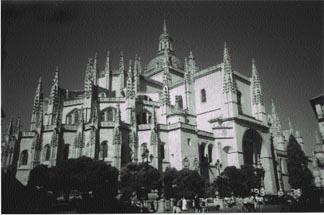 Spain&s history, revealed through its architcture, is pictured here in the many spires of this structural delight.
Rachel Hoerman

Spain&s history, revealed through its architcture, is pictured here in the many spires of this structural delight.

As you step off the plane in Barcelona, this much becomes apparent: Spain is no place like home. At first glance, palm trees replace pine trees, the glittering Mediterranean competes with your distant recollection of the chemical bath that is the Fox River, and assumptions like “someone here must speak English” can be lethal (or at least cause you to miss your connecting flight to Madrid).I spent a month and a week of this past summer in Spain, learning the language, absorbing the culture, and appreciating the beauty of a country drastically different from any place I have ever been.

Armed with little more than the survivor Spanish I was able to glean from movies—no comprende espanol—the first month of my stay was centered in Madrid, Spain’s capital city. I lived with two older women, who were as eccentric as they were friendly, in a turn of the century apartment building with marble floors and an antique elevator, situated along the fringes of Madrid’s old town. It was a neighborhood centered between districts of towering 17th century townhouses, the jumble of fountains, lakes, and statues that composed Retiro Park, and twenty years’ worth of modern urban sprawl.

I took Spanish classes at a specialized language school during the week, and on the weekends traveled around central Spain—an arid region of rolling hills whose scrub brush and windmills I’d previously thought were confined to the pages of Don Quixote. While in Madrid province, my school held cultural classes in front of El Greco’s famous painting, “The Burial of Count Orgaz,” in the ancient city of Toledo, whose walls had seen legions of invasions from the Romans to the Moors, and where it was over 110 degrees in the shade. My studies also took me around into the regions North and South of Madrid, where my class held lectures along the towering and un-mortared wonder of a 4th century a.d. Roman aqueduct in Segovia, and in the royal courtyard of the Moorish Mezquita (mosque) in Cordoba.

Not that there wasn’t enough to do in Madrid itself. As Spain’s capital city, Madrid is home to a ton of expansive and lush parks, opulent architectural achievements, a host of world-class art museums, a thriving nightlife, and three million of the friendliest people in the world. The names of Spain’s celebrated sons—artists like Picasso, Goya, and Velasquez, the author Cervantes, and the bullfighter Romero, are plastered in every pub along Madrid’s main thoroughfare, Gran Via, and in every tourist shop clinging to the 16th century walls of the Puerto del Sol (gateway of the sun plaza).

Madrid is a city that still shuts down for the Spanish tradition of siesta from two to five p.m. in the afternoon, where you find yourself taking supper around 10 or 11 p.m., where 2 a.m. is the magical hour when the night truly comes alive, and where, after a night of clubbing along Gran Via, one can purchase the Spanish breakfast specialty of chocolate con churros (deep-fried spirals of dough dipped in thick, pudding-like hot chocolate), before getting ready for class and further repetition of the process.

After a month in Madrid, I took the night train to Barcelona, a port city on Spain’s North Eastern coast, and stepped out into what felt like a different country—a different world. Gone was the structured formality of Madrid’s architecture and streets, its parks and museums, and the usefulness of the Spanish I learned there. Barcelona is a city where the artistic movement of Art Nouveou, artists like Picasso, Gaudi, and the regional dialect of Catalan and tourist English reign.

Situated in a valley between the foothills of the Picos de Europa, and the azure Mediterranean Sea, Barcelona was shockingly more relaxed and less structured than the already lax-in-a-good-way Madrid. Barcelona and its beaches received a face-job for the 1994 Olympic Games, and have been riding on the international attention ever since.

I stayed in a youth hostel in the Barri Gottic, or Gothic quarter of the city, whose piercing cathedral spires and cobblestone streets soon gave way to the infamous pedestrian walkway Los Ramblas—a haven for street artists, performers, and pickpockets where you could get a henna tattoo for just under three U.S. dollars, and buy exotic fruits fresh off the boat every morning at St. Josef’s Mercat.

While in Barcelona I also enjoyed its white-sanded, albeit somewhat polluted beaches, and its proximity to the Costa Brava, or the Brave Coast, to tour some of the towns which originally came into being as Roman fortifications over 1,800 years ago before boarding a plane to Warsaw, Poland, another to Chicago, and finally, a greyhound home.

My time in Spain was golden. I had the opportunity to learn a language and appreciate a culture first-hand, and to experience and observe a country still struggling with its fair share of problems.

Whether it be a stagnant economy, rife unemployment, or the occasional bombing that takes a life, Spain is a country whose present instability signals its emergence from the shadow of a tumultuous past. The Romans, Visigoths, Moors, Jews, and Catholics each had a hand in shaping Spain’s history, and their scholarly, technological, architectural, and linguistic footsteps can still be traced throughout the country. Their influences help to forge the ethnic variety and regional conflicts of a country that is still scarred and reeling from Franco, still predominantly Catholic in mindset and habit, and still struggling to unite its individual regions into a functioning whole.

Spain is no place like home. It is a world apart, a wild country whose very flaws define its national character, whose diversity of languages and people are reflections of its fascinating past, and whose palm trees I prefer over pine trees any day of the week.