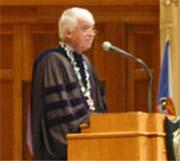 President Warch gave his final matriculation convocation to his final freshmen, as well as other students and the members of the faculty.
Peter Gillette

President Warch gave his final matriculation convocation to his final freshmen, as well as other students and the members of the faculty.

President Richard Warch used his 25th and final Matriculation Convocation as an opportunity to turn the critical gaze of the summer’s ubiquitous national issue, diversity in education, inward. Rather than devoting the measure of his address to analyzing the Supreme Court’s decision in the recent University of Michigan decision, Warch challenged professors and students to reexamine their notions of community. He urged students to seek at various levels, from the classroom to the residence halls to the meetings of clubs and organizations, to be more inclusive and to seek to understand the positions of others.

In his introduction of Warch, Jerald Podair quipped that Warch’s Presidency bridged “the age of disco and the age of J-Lo without lapsing into sentimentality.” Warch later recalled a story he heard soon after moving to Appleton, wherein a young boy asked the family moving in next to him, “Are you Lutheran, or Catholic?” That story, when contrasted with diverse hiring practices by corporations such as Kimberly Clark and a generally more diverse population, was used to demonstrate how the Appleton community has expanded during the last 25 years.

But Warch argued, citing David Brooks’ recent Atlantic Monthly, the American university in particular has a long way to go before it is truly diverse. Statistically, Lawrence University’s student body includes a 7 percent racial minority. Brooks also pointed out the relative absence of evangelicals, who comprise 40 percent of the general population, in liberal learning.

The challenge, as Warch put it, for Lawrence University is found in two parts of its mission statement: “To enroll intellectually curious students who demonstrate an abiding desire to learn and the will to join a community of scholars and artists in the vigorous pursuit of knowledge…To seek diversity within the university community as a means to enrich teaching and learning and to promote tolerance and understanding.”

“The assumption is that the community of scholars and artists already exists, and there is a will to join it,” Warch added. “The rub,” as he saw it, was that often scholars, artists, and musicians tend to have a desire to convert others and eventually enforce a sort of homogeneity.

Much of his challenge was directly to students, whom he compared to the early church: “Wherever two or more are gathered together, there they are recognized by LUCC,” he quipped.

Lawrence University’s richness, he argued, is that Greek Letter Organizations, Yuais, Objectivists, Vday Members, Democrats and Republicans can coexist and, ideally, learn from one another.

“I am pleased to report that LUPO (Lawrence University Pagan Organization) and LCF (Lawrence Christian Fellowship) were at Bjorklunden the same weekend last spring, and all went well,” Warch joked.

Warch focused less on quotas and more on general attitudes of engagement, adding, “We cannot seek any one kind of diversity.”

A diverse community, a word he spent a great deal of care defining, complicates argument but also enriches it. Warch envoked Elie Wiesel, the Nobel Laureate, who said a community should be defined by the identity of other individuals in it.

Much of the address engaged Brooks’ Atlantic Monthly piece, still on newsstands. The article, “People Like Us,” is excerpted online at http://www.theatlantic.com/issues/2003/09/brooks.htm.

The next convocation is entitled “An Evening with David Sedaris.” The key word here is “evening,” as the popular humorist will be speaking at 7:10 p.m., rather than the usual 11:10 a.m. time slot.