Wilber’s Blackened Blues leaves you with the blues 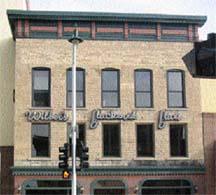 Wilber’s blackened blues is only several short blocks from campus on College Ave., but leaves a lot to be desired.
Rachel Hoerman

Wilber’s blackened blues is only several short blocks from campus on College Ave., but leaves a lot to be desired. (Jessie Augustyn)

Wilber’s Blackened Blues is one of many restaurants that sprang up in the wake of the Ave’s recent facelift. Outwardly, it adds a much-needed touch of class to what was once (and in some parts still is) a rather sad-looking stretch of old downtown. My friends and I decided, in an effort to locate some decent Cajun food in small-town, nowhere Wisconsin, to try out Wilber’s Blackened Blues one evening.

Stepping in, my friends and I were confronted by a large main staircase flanked by two dining rooms and little else. There was no sign or hostess to direct us where to go.

After milling about the lower dining rooms for a time, running up the stairs and sliding down the railing, and milling about the upper rooms for a while more, we finally located someone who could tell what we had long suspected: that we had to take a seat and wait for a while (surprising, considering the dining room had not been particularly full).

After what I’m told was a delicious warm coffee and liqueur concoction for my friends and a decent Southern Comfort old fashioned sweet with extra cherries for myself at the bar (the highlight of which is a huge metal sculpture of an alligator), our name was called and a waitress led us to our table.

The dining room we were seated in had a warm and rustic atmosphere, which was about all it had going for it after we were given our menus and then ignored for a good 15 minutes by wait staff and hostess alike. Eventually, a pleasant waitress outfitted in denim overalls took our orders.

Now, as a vegetarian, it is rather hard to get a taste for Cajun cooking because the food is centered on the one or more meats. This was not a problem at Wilber’s, however. I was able to chose from two or three meat-free dishes. I ended up ordering pasta with an olive oil and sun-dried tomato sauce, although it was rather pricey.

My two carnivorous friends chose ribs and the jerk (a mixture of spices) chicken.

The salad my pasta came with arrived quickly and was like standard salad everywhere. My friends ordered a side of sausage, which they said was hot, juicy, and good. Our meals were served with mediocre bread and a stingy serving of four hush puppies, which I seem to recall had the potential of tasting good, although I cannot be sure, as I was only able to enjoy 1 1/3 of said hush puppies.

Our main dishes also arrived promptly. My pasta noodles were a little mushy, and they were certainly nothing to brag about, but the sauce definitely was. A concoction of sun-dried tomatoes, artichokes, garlic, and sliced olives sauted in olive oil, the sauce was piping hot, well-seasoned, and flavorful.

The asparagus added a fresh, green taste that was well balanced by the garlic, tomatoes, and olives. And even though the sauce was almost purely olive oil, it was infused with a hearty taste that carried the garlic and the other seasonings quite well.

My friends enjoyed their food as well. The ribs, I’m told, were swimming in a tangy sauce that was good and different from your standard barbecue sauce. My other friend liked the chicken, which he said was well seasoned and juicy.

Our waitress was less than prompt when getting us water and the bill and we left feeling rather unappreciated.

The food at Wilber’s Blackened Blues is good. Not great, but good. Combined with the prices, which I must say are a little inflated for a restaurant where you eat off paper placemats and are served by people dressed like your Southern yokel cousin, it’s not a great deal.

The dcor, too, attempts to combine class and theme, and falls short of both. In short, go to Wilber’s Blackened Blues expecting to pay a pretty penny for good food, bad service and a mediocre atmosphere.