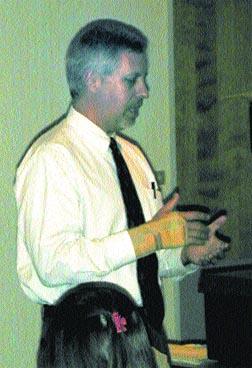 This past Tuesday, Dr. Jeffrey Foran and Rebecca Katers spoke to a group in the Barber Room about the proposed cleanup process of the Fox River and Green Bay area. The region, since 1997, has been on the EPA’s (Environmental Protection Agency) National Priorities List. Katers, who is the Executive Director of the Clean Water Action Council of Northeast Wisconsin, began the talk by giving an overview of the cleanup process. According to Katers, there are two parallel interests within the process, the cleanup itself and the damage assessment of the area’s contamination levels. Much of that work has been done and documented by the Department of Natural Resources (DNR) with the help of 4 million dollars received from the federal government.

Katers talked also about the history of the ecological damage. Between 1954 and 1971, the paper mills in the Lower Fox River Valley that produced or recycled carbonless copy paper discharged PCBs, or polychlorinated biphenyls, into the river. PCBs, which are a chemical family of more than 200 different compounds, accumulate in the fatty tissue of animals, including fish, waterfowl, and humans. In 1976, the DNR issued a fish consumption advisory warning for the river and Green Bay. Waterfowl advisories followed in 1987 and remain in effect today.

The assessment and proposal alternatives have been compiled and made public in a publication called the Remedial Investigation/Feasibility Survey. Foran, a toxicologist, adjunct professor at UW-Milwaukee, and President/CEO of Citizens for a Better Environment, talked about the proposed options for cleanup and the currently developed plan. The DNR evaluated seven cleanup alternatives, and decided upon two of them for the cleanup of five sites, or reaches, along the lower Fox River and Green Bay. The two proposed technology alternatives are dredging with off-site disposal and monitored natural recovery.

The alternative that has been proposed for the reach that includes Appleton is monitored natural recovery. This alternative means a 40-year monitoring program that would control the contamination levels in the water as well as human and environmental exposure to the pollution. The dredging option was considered for this area, but not chosen partly because the dams and locks would block operations. Also, in 1999 and 2000, twenty-five percent of the reach’s PCB mass was removed, while the river tends to accumulate less in this reach than in others. Studies estimate that it will take 70 to 100 years for the area to meet safe ecological levels.

The other alternative for cleanup is dredging and offsite disposal, which has been proposed for three out of the four reaches. Dredging involves a hydraulic dredge, and the use of near-shore property for the docking of dredges and temporary material storage. Sediment from the river is taken out and cleaned, usually at a nearby landfill. Dredging would be expected to last around 6 years and, depending on the area, ecologically safe levels could be reached in 14 to 45 years.

Foran also talked about the cost of this proposal, 309 million dollars, and the seven corporations that are involved in paying the costs. The corporations would also have to pay in a compensation plan proposed by the U.S. Fish and Wildlife Service that would cost them between 176 and 333 million dollars. Documents and information for these proposals are open to the public and are encouraged reading for those who would provide input into this process.