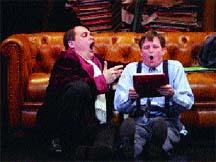 Brad Oscar and Andy Taylor in The Producers, the new Mel Brooks musical performed by the NationalTour Company
Andy Dolan

Brad Oscar and Andy Taylor in The Producers, the new Mel Brooks musical performed by the NationalTour Company (Paul Kolnik)

The most anticipated performance to come to the Appleton Performing Arts Center since its opening has proven to be a rousing success.The Producers, a musical by Mel Brooks, has won 12 Tony Awards and received widespread media attention during its run on Broadway with Nathan Lane and Matthew Broderick in the starring roles.

In the production performed at the PAC, Brad Oscar did an excellent job playing Max Bialystock, a portly Broadway producer who is renowned for his monumental flops. After producing a series of sub-par musicals, he is relegated to raising money for productions by wooing elderly ladies and getting them to cough up money in exchange for Bialystock’s “personalized attention.”

When a chance to change his fortunes appears, Bialystock jumps at the opportunity.

The plan, unwittingly conceived by Bialystock’s accountant, Leo Bloom, is to defraud investors by raising $2 million and then producing a horrendous musical that flops at the box office. That way the producers of the show can keep the money they don’t spend and never reimburse the investors.

The musical they choose is Springtime for Hitler, an ode to the Fhrer written by a nostalgic and ber-patriotic ex-military German named Franz Liebkind.

Bialystock and Bloom anticipate a certain critical failure in such a production, which will result in the success of their plan. Trouble ensues when it proves to be the biggest hit in years after critics hail it as a satiric masterpiece.

Andy Taylor, as Leo Bloom, played his role enthusiastically but without the nuanced idiosyncrasies that Oscar demonstrated so well in his role. Taylor was at his best early in the musical when Bloom experiences a panic attack brought on by Bialystock’s attempt to pressure him to commit fraud. Overall, Taylor played the role well, but his performance was not as commendable as Oscar’s.

For the most part, the musical was consistently funny and enjoyable. Some of the running jokes that were initially amusing, such as the abundance of ultra-gay characters, became a bit stale as the show progressed. That, however, did not prevent the musical from being hilarious on the whole.

Several brilliant sight gags added substantially to the humor. One in particular (it deserves to win an award for the best use of a mirror in the history of live performance) was the highlight of the entire musical.

Despite a number of technical glitches, including several rough scene transitions and audio problems, the show was remarkably well executed. Everything from the scenery to the costumes to the acting was top-notch and did justice to the material.

While some may have been surprised to see a musical of this magnitude come to Appleton, or may even have been skeptical of the PAC’s ability to cater to such a production, the venue proved more than adequate to accommodate the show.

The show runs Sept. 18-28 in Appleton. Other cities on the tour include Boston, Chicago, Detroit, and Philadelphia.

If the Performing Arts Center can continue to attract performances of this caliber, it will have no problem becoming a permanent fixture of Appleton cultural life.