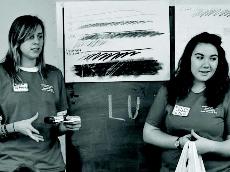 Monday, Jan. 18, Lawrence
University promoted a long Martin
Luther King Jr. Day of celebrations.
The day included opportunities
for volunteering around the
Fox Valley community, the volunteer
fair, which brought organizations
from around Wisconsin to
campus, and a celebration with
Reverend Wanda J. Washington at
the Memorial Chapel.
At the volunteer fair,
Lawrentians interested in volunteering
found more than 30 organizations
handing out information
about their volunteer programs in
the lobby of the Warch Campus
Center. The fair also attracted volunteer-
oriented members of the
Appleton community.
St. Paul Elder Services, a
Catholic-sponsored institution in
Kaukauna, was interested in coming
to campus to try and attract
music-oriented students to volunteer
with them, saying they noticed
that music had a positive influence
on the elderly with whom they
work.
Among other organizations,
the Haiti Music School Relief Fund
received a lot of attention from
Lawrence students. The group promoted
the benefit Jan. 20 concert,
Concert for Haiti, and a classical
music concert Feb. 6, title still to
be announced. The group also took
up a collection during the fair.
Martin Luther King Jr. Day
ended with a program at the
Memorial Chapel, sponsored by
Toward Community: Unity in
Diversity, a non-profit organization
which meets quarterly to
address advocacy needs and to
plan community events, as well as
by the Lawrence University Office
of Multicultural Affairs.
The program attracted outside
media coverage, including from the
Appleton Post-Crescent, as well as a
large presence from the Appleton
community.
Adding to the community presence
was the presentation of the
Jane LaChapelle McCarthy Unity
in Diversity Award to businesswoman
Kathi Seifert.
The presentation also honored
five Appleton schoolchildren,
ranging from grades two to 12,
who won an essay contest on how
Martin Luther King Jr. influenced
their lives.
Washington, who was born and
raised in Chicago, Ill., was the main
speaker of the evening. She was
the first African American female
in the United Church of Christ to
start a new church in Wisconsin,
the Grace United Church of Christ,
which was founded in Milwaukee.
Reverend Washington told
her audience that what she likes
the most about King is how he
“made the word ‘love’, which is a
noun, become a verb, which means
action. It mandates to respect
everybody.”
Reverend Washington also said
that if a person wants to make a
difference he or she can always
start.
“There’s something that could
be done right where you are. Then
move forward,” she said. Her
speech also mentioned Barack
Obama’s presidency, which she
celebrated.
Washington noted that every
“child should have access to highereducation.” Her final challenge
for the audience was to “move
the word ‘love’ from a touchyfeely
thing into an action verb.”
The evening ended with the
audience at Memorial Chapel
holding hands while singing in
unison “We Shall Overcome,” led
by Lawrence student Sirgourney
Tanner. 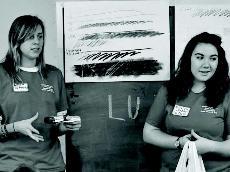