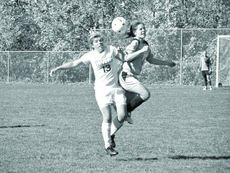 Jordan Holmes
Women’s soccerWhat was the best part about beating Carroll last weekend?
The fact that we haven’t beat them during my four years and it’s about time we showed them up!

What went through your mind when the buzzer rang and you won the conference tournament?
That was the longest 15 seconds of my life. Who should I hug? Then I started laughing – and hugging my team.

What is the best memory you have from the past four years?
I assume you mean with soccer… probably running 120s. I mean, who doesn’t want an oxygen-deprived, painful, cruel, stressful and timed workout?

Do you prefer turf or grass? Why?
Well, it really depends on the team. I like when the ball runs out of bounds on turf, but I much prefer falling on grass. I’d have to say grass just cause I feel like it’s to my advantage that the ball doesn’t move too fast.

If you could go back to the beginning of the season and do it over again, would you change anything?
Yeah, there are always things you want to change. But if I change them would we end up with the same result? Plus, I can’t remember what I would want to change anyways.

If you could play any other position what would it be and why?
It would have to be quarterback because it would be nice to be able to manipulate the defense just by your cadence, body language in the pocket and the fact that you’re also a running threat.

What is the hardest part about your position?
Probably just keeping your legs fresh and healthy throughout the season.

What is one piece of advice you would give to an incoming freshman about how to prepare for college football?
Always do extra. Whether it be catching balls, running routes, sprinting, lifting – always do extra. Because in the end that work ethic will take care of your performance.

What is your most memorable touchdown reception?
Um, I don’t know, really… I guess I would have to say the touchdown I scored against Carroll University my sophomore year. I scored off a rocket screen.

Who do you think is the best professional player in your position? why?
Of all time? I would say Jerry Rice because he was not the fastest guy but ran the smoothest routes. But best wide receiver right now? I would say Chad Johnson because he plays with such tenacity. 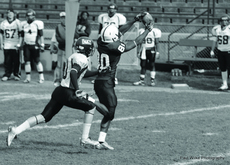