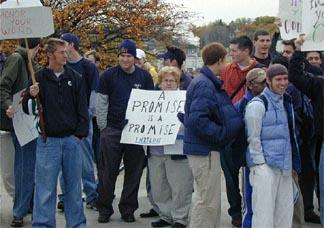 Members of the community joined the fraternities for Thursday&s protest.
Andy Dolan

Members of the community joined the fraternities for Thursday&s protest. (Ryan Marx)

The Lawrence Fraternity Alliance will be holding demonstrations this week in order to protest recent decisions and policies of the Lawrence administration and Board of Trustees. Specifically, the continuing issues regarding the new Student Group Housing proposal, which could potentially remove some of the fraternities from their current quadrangle establishments, are the primary reasons for the picketing. Kit Vernon, Public Relations representative for the Fraternity Alliance, made a statement regarding the intent of the protests as well as identifying some participating members. He explains, “Members of the fraternities, of sororities, non-affiliated students, and some alumni will be doing informational picketing. Their purpose is to be heard directly by the administration and Trustees, and to put the lie to administration claims that the fraternity housing issue is an ‘alumni issue,’ which the fraternity chapters are not involved in AND to show that the fraternity position is supported by both sororities and non-affiliated students, also contrary to administration claims.”

As of press time, the three planned times and locations of the picketing are as follows:

Oct. 20 – Homecoming football game, Banta Bowl, prior to the game

The board members are set to decide at the meeting this week on issues related to student group housing and future plans for the campus center. 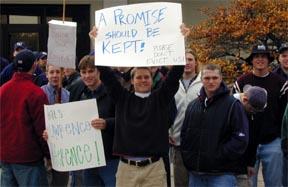