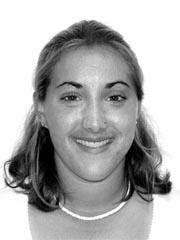 Molly Johannessen, Midwest Conference Defensive Player of the Week, was given the honor only one week after her teammate, goalkeeper Katie Wilkin.
Lis Pollock

Molly Johannessen, Midwest Conference Defensive Player of the Week, was given the honor only one week after her teammate, goalkeeper Katie Wilkin. (Quinn Lake)

The past few weeks have brought nothing but success to the Lawrence women’s soccer team. Last Wednesday the Vikings recorded a double overtime victory over Ripon College 1-0, and dominated Carroll College 4-1 on Sunday.In recognition of her outstanding performances in both of those games, junior defender Molly Johannessen was named Midwest Conference Defensive Player of the Week, just one week after the honor was awarded to LU goalkeeper Katie Wilkin.

The acclaim bestowed on the two Vikings does not surprise Head Coach Moira Ruhly. “Although it is usually goalies who receive the award, I think they both really deserve the recognition. Having two players get it back to back is just outstanding,” she said.

Johannessen not only played all but 17 minutes of the 114 minute contest against Ripon, but she also handed out the assist to Greta Raaen’s game-winning goal. In the game against Carroll, she had two assists to lead the Vikings to victory.

In addition to her offensive contributions, Johannessen leads a talented core of defenders who have only allowed one goal in their last 204 minutes of action.

“It’s kind of exciting to be given such an honor, “Johannessen said, adding, “It makes me feel like I can be really competive in our conference.”

Wilkin concurred, saying, “It’s a great honor to be recognized, and it’s also really special to be a part of a team that can have multiple Players of the Week.”

The 2000 Lawrence squad was the first women’s soccer program in Viking history to win the Midwest Conference Championship and advance to the NCAA Playoffs. This year, the team expects nothing less than a repeat of last year’s showing.

Senior co-captain Sandi Blick said, “The entire team seems to be working well together, whether it be the starters or players coming off the bench. We are much more consistent than last year, and we’re winning the close games we should be winning.”

After their win Wednesday afternoon against St. Norbert’s, LU is 6-0 against conference opponents, and boasts a winning record of 7-4-1, with two of the team’s losses coming from tough state school competitors.

Ruhly is very enthusiastic about her team’s chances to repeat as conference champions this year. She said, “The team has set high goals for themselves, and they believe in each other. They learned what it takes to be champions, and they know what they have to do.