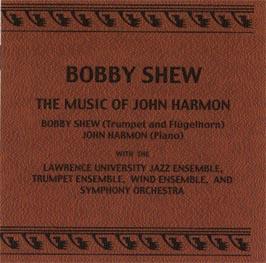 Two new cds from the Lawrence Conservatory are spinning in my stereo, insistently vying for priority play-time in my dorm. Both Premieres 2000, a Lawrence University Wind Ensemble record, and Bobby Shew, The Music of John Harmon, with an eclectic mix of Lawrence music groups, were released early this fall. Premieres 2000 is an exclusive contemporary collection of compositions premiered by the wind ensemble. It includes three works written by Lawrence faculty members and one by a Lawrence student.

Even the captivating cover art, “The Visitation,” a work by Mollie Strom (01), is the product of Lawrentian talent. “Impermanence,” which is the third track on Premieres 2000, is by Michael Trinastic, a theory/composition major at Lawrence. Trinastic’s composition is written in two movements; both movements highlight multiple solo players in the wind ensemble, while the marimba plays a prominent role in the second movement. “Impermanence” is Trinastic’s first work for the LU Wind Ensemble.

Premieres 2000 is dedicated to the memory of Fred “Prof” Schroeder, who was the director of bands at Lawrence from 1951-1978. In 1960, Schroeder premiered a composition with the Lawrence Wind Ensemble by H. Owen Reed entitled “Che-Ba-Kun-Ah” for string quartet and wind band.

As a special tribute to Schroeder and his work at Lawrence, “Che-Ba-Kun-Ah” was recorded in 2001 and included as the last track of Premieres 2000.

When Reed heard Premieres 2000, he wrote to conductor Robert Levy, the current director of bands at Lawrence, “I was favorably impressed with every work on this program. Not a weak spot. What wonderful talent you have in Appleton!”

Levy commented that the intense recording-studio experience involved in producing a cd gives student musicians a realistic view of the professional recording world. He also noted that it has been four or five years since the last release of a wind ensemble cd, thus this recording will stand as a documentation of the wind ensemble’s repertoire with student personnel over the three years involved in the recording.

Levy commented that since Premieres 2000 is recorded on a national recording label, Mark, it will be accessible worldwide and will receive national radio airplay and be a showcase for Lawrence talent.

The other cd released this fall is Bobby Shew, The Music of John Harmon. The euphonious sounds of Shew’s trumpet are dazzling throughout Harmon’s inspired, contemporary compositions.

Other tracks include “Trilogy,” with the LU Wind Ensemble, “Mustang,” with the LU Trumpet Ensemble, and six tracks of a two-person showcase with Shew and Harmon entwined in beautiful musical fashion.

Lawrence’s history with composer Harmon spans back to his days as a composition major here (57). He was the first jazz studies program director in the mid 70s, coached jazz ensembles in recent years, and currently teaches jazz composition, arranging, improvisation, and jazz history.

Levy remarked that Harmon’s compositions have long been a source of interest and fascination for the world-renowned trumpet player, Shew. This interest was crucial in the genesis of the Shew recording project.

In his stirring convocation Tuesday, Wynton Marsalis urged the standing-room-only crowd to surround themselves with what is best in modern culture and music. In this way, we can begin to fulfill what he coined as the new “American mythology.” Premieres 2000 and Bobby Shew, The Music of John Harmon are definitely excellent examples of what is best in contemporary culture and the accomplishments of the Lawrence Conservatory.

Premieres 2000 is currently available for purchase at the Conservatory Office, and Bobby Shew, The Music of John Harmon is available on the Sea Breeze label through Amazon.com. 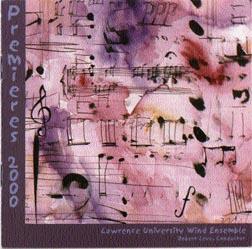