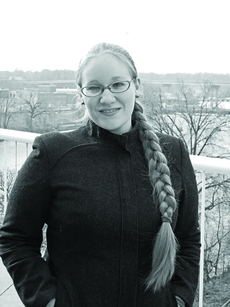 Although Aviva Milner-Brage will leave Lawrence with a Bachelor of Music degree in clarinet performance, she doesn’t plan on making a career with her instrument. She has spent a lot of her time here studying ethnomusicology – the social and cultural aspects of music from both local and global perspectives.
This growing field is the direction that Milner-Brage would like to go after graduation, but first she must perform her senior recital on clarinet. Not surprisingly, her recital Saturday, Nov. 13 at 3 p.m. in Harper Hall will feature music that reflects a variety of cultures.
One of the pieces Milner-Brage will be performing is a duet for two clarinets that is heavily influenced by Balinese Gamelan. It was written by Michael Tenzer, a well-known ethnomusicologist in gamelan.
“The second movement particularly sounds like gamelan because of interlocking rhythms that reflect playing the reyong, which is a long wooden instrument that seats four players and holds twelve inverted pot gongs,” commented Milner-Brage. “Emily Cook and I could not play this piece if we were not reyong players in gamelan.”
Also on the program for the recital are “Dance Preludes” by Lutoslawski, Persichetti’s “Parable for solo clarinet” and “Six Bagatelles” for woodwind quintet by Ligetti. All of this is music from the late 20th century, which was when Milner-Brage’s favorite clarinet repertoire was written.
It’s going to be a busy weekend for Milner-Brage, as she will also be performing with the Lawrence Symphony Orchestra Saturday night at 8 p.m. and with the Wind Ensemble Sunday afternoon at 3 p.m. Both of these performances are in the Lawrence Memorial Chapel.
Despite all of these performances and a degree in clarinet, Milner-Brage said she came to Lawrence to study music in general.
“I think I’ve discovered that I am much more interested in being absorbed in other musical practices and studying the history and meaning of music in culture,” she noted.
This curiosity has led to some work in the field of ethnomusicology while at Lawrence. Milner-Brage completed an independent study with Sonja Downing, Lawrence’s postdoctoral fellow of ethnomusicology, on Mongolian and Tuvan music.
That is an area of ethnomusicology that she will probably want to study while attending graduate school. Milner-Brage, who will actually finish her Lawrence career at the end of this term, is looking at schools in California that have well-established ethnomusicology programs.
Milner-Brage, who will also graduate with a minor in Russian studies, thinks that those studies also led her to ethnomusicology because it helped her realize the interest she had in culture and anthropology.
Although she has played many instruments in addition to clarinet, like piano, saxophone and harp, Milner-Brage thinks that she always should have been a percussionist.
“That is the area I gravitate towards for ethnomusicology,” she said. “I envy the multicultural study in percussion – you can’t learn it without spending a lot of time learning about beats and instruments from many different origins. I also am fascinated by sound in general, and there are so many different kinds of sounds you can make with percussion instruments.”
Although she won’t be playing percussion, Milner-Brage’s interest in sound will surely be on display this Saturday through a variety of multicultural music on clarinet.