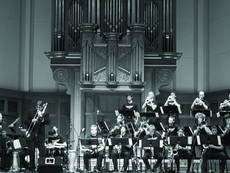 As soon as the renowned trombonist Conrad Herwig walked onto the Lawrence Memorial Chapel stage and immediately counted off the Lawrence University Jazz Ensemble last Saturday night, the chapel was filled with an energy that lingered throughout the concert.
Saturday night’s performance marked the end of Lawrence’s annual Jazz Weekend, which showcases a variety of jazz performances and clinics each year. This Jazz Weekend featured the renowned singer Luciana Souza – who serenaded a full chapel with a beautiful combination of samba and jazz on Friday night – and Conrad Herwig.
Herwig performed with the Lawrence University Jazz Ensemble, the Lawrence University Trombone Choir and the Lawrence University Faculty Jazz Trio. His set with LUJE featured four Latin arrangements for big band, three of which were arrangements of saxophonist John Coltrane’s compositions.
LUJE and Herwig began the concert with an arrangement of Coltrane’s “Blue Train.” Herwig’s arrangement startled the audience with a loud, energetic horn introduction. The rest of the arrangement featured a sax soli, but the most impressive part of the tune was Herwig’s solo.
Herwig’s playing is both incredibly fast and high, two characteristics that don’t fit the lethargic, low stereotype of the trombone. Herwig’s solo on “Blue Train” started out fast and accelerated as the tune progressed, a characteristic of his solos throughout the concert.
His solos were never very emotionally expressive and were not always exceptionally well developed. But they were filled with energy and Herwig’s sheer virtuosity commanded the audience’s attention throughout the night.
After ending “Blue Train,” Herwig explained his motivation behind writing Latin arrangements of Coltrane tunes. Herwig described how he wanted to take an “Afro-Caribbean journey through the music of our heroes.”
Kimberly-Clark Professor of Music and Director of Jazz Studies, LUJE director Fred Sturm was enthusiastic about these arrangements and explained that he “admired how Conrad Herwig reconstituted the well-known Coltrane compositions in Latin grooves.”
Sturm further explained, “The rhythmic variations he created were very different from the original Coltrane versions, but I think that they were highly successful.”
These differences were evident in the next two pieces LUJE performed: Coltrane’s “Africa” and “Lonnie’s Lament.” The John Coltrane Quartet’s recordings of these pieces are deeply emotional, full of impassioned interaction between musicians. While LUJE played the arrangements energetically, Herwig’s Latin arrangements seemed to be a bit constraining.
These arrangements did not allow the ensemble to play as expressively as they are capable of, and the tunes became slightly repetitive at times. Herwig’s idea of arranging Coltrane tunes over Latin grooves is certainly novel, but his arrangements confined the ensemble to a salsa groove and consequently prevented the players from exploring the sonic freedoms that epitomize Coltrane’s playing.
“A Love Supreme,” the first tune Herwig played with the 30-person Lawrence University Trombone Choir was similarly problematic. “A Love Supreme” is perhaps one of the most emotional and spiritual albums out there, so hearing 30 trombones play the familiar melody over a salsa groove was a bit disconcerting.
I did enjoy some aspects of the trombone choir. For example, simply hearing 30 trombones play together on Herwig’s non-salsa composition “Moonlight on the Water” was terrific. However, I would have preferred the trombone choir to play for a shorter period of time and for the faculty trio to play for a bit longer.
Seeing Herwig play with the Lawrence Faculty Trio with Professor of Music Dane Richeson on drums, Associate Professor of Music and Teacher of String Bass Mark Urness on bass and Instructor of Music Lee Tomboulian on piano was a treat. The trio had an exceptionally high energy level throughout its set and nicely complemented Herwig.
The climax of the set was the last tune of the evening, Herwig’s own “Code Blue,” which featured both a ridiculous solo by Herwig and explosive solos from Richeson. It was an energetic closure to an energetic evening.