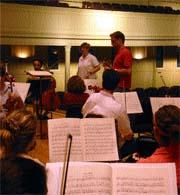 The Lawrence Symphony orchestra rehearses for the annual choir and orchestra extravaganza. This year, Giuseppe Verdi&s &La Traviata& is the programmed piece, and for the first time the orchestra will perform at the PAC.
Nick Siegel

The Lawrence Symphony orchestra rehearses for the annual choir and orchestra extravaganza. This year, Giuseppe Verdi&s &La Traviata& is the programmed piece, and for the first time the orchestra will perform at the PAC. (Julien Poncet)

The Lawrence University Concert Choir, women’s choir, chorale and symphony orchestra along with the White Heron Chorale will be performing Giuseppe Verdi’s (1813-1901) opera “La traviata” on Saturday, May 31 at 8:00 p.m. at the Fox Cities Performing Arts Center. The performance, under the direction of Bridget-Michaele Reischl will mark the final large production for both the choral department and symphony orchestra for the 2002-03 academic school year. This performance will, however mark the first for the Lawrence Symphony Orchestra at the PAC. The three act opera will feature Lawrence faculty members Rico Serbo performing as Alfredo and Karen Leigh-Post as Flora along with guest performers Virginia Grasso performing as the plot’s central protagonist, Violetta and Theodore Lambrinos as Alfredo’s father, Germont. In addition the production will also feature Lawrence alumnus and tenor Shazore Shah.

After agreeing to write an opera for the upcoming Carnival season in Venice, Verdi and librettist Francesco Maria Piave based their work on Alexandre Dumas’ play La Dame aux camellias. “La traviata” (the fallen woman) first premiered in Venice in 1853 at the Teatro de Fenice.

The plot of the opera involves two fated lovers, Violetta and Alfredo, who meet at a party in the first act. Violetta is a courtesan who surprises herself by falling in love with Alfredo, but is convinced to leave him by her father. Tragedy ensues when love becomes too strong for them both.

The widely adored work combines many of the compositional strong points found thoughout Verdi’s career that are exemplified in the expressive climax during the final act when Violetta, the “fallen woman”, and her lover Alfredo are reunited before her imminent death.

Tickets are available for students at the Lawrence University box office. Non-student ticket information and booking can be found at www.foxcitiespac.com. The website also features a list of upcoming events performing at the Fox Cities Performing Arts Center.