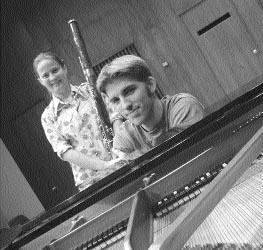 This past week, the two winners of the Lawrence Symphony Orchestra Concerto Competition earned the best seat in the house. Bassoonist Renee DeBoer and pianist Daniel Van Sickle will perform with the LSO front and center on the newly expanded Chapel stage during the Nov. 17 and Jan. 19 orchestra concerts, respectively. Both DeBoer and Van Sickle competed against 10 other pre-selected Lawrence students for their moment in the stagelight. Although both DeBoer and Van Sickle will be performing with a full orchestra for the first time, they each know what they want the audience to hear in their debut. The experience, DeBoer expects, “will be a rush. I hope it’s as exciting for everyone else as it is for me.” DeBoer, who is a senior bassoon performance major, will be performing Carl Maria von Weber’s “Andante and Hungarian Rondo,” a piece that she says “is a real crowd pleaser as bassoon solos go.” She decribes the opening of the piece as a “lovely theme-and-variations, while the rondo movement by contrast is very tongue-in-cheek.” DeBoer calls it “a piece of music that doesn’t take itself too seriously, written for an instrument that no one really takes seriously.” The bassoon, she says, “has always been regarded as the comic relief of the orchestra. The ‘Hungarian Rondo’ definitely plays up that image, but it also really showcases the bassoon’s musical versatility. It’s very effective.”

Van Sickle will perform Dmitri Shostakovich’s “Piano Concerto No.1.” He wants the audience to be “prepared and be willing to laugh. I want people to laugh. Shostakovich wrote it for a reason. It can’t not be funny.” A junior music education and piano performance double major, Van Sickle hopes the piece will be “as fun to watch as it is to listen to.”

The concerto, which Shostakovich wrote for his conservatory graduation, shows the composer’s wit, and plays with audience expectations. “I just have fun with it,” Van Sickle says, “and I don’t feel like I’m faking it. It really comes from the piece.”

This concert season features a number of soloists, including professors Rico Serbo, Matthew Michelic, and Anton Miller, who is performing this Saturday. The audience and orchestra will have many chances to hear the give-and-take between a soloist and the orchestral instrument. Each concerto, and more importantly each performer, plays on that relationship differently. Both DeBoer and Van Sickle are very aware of this relationship, and it will be evident in their performances.