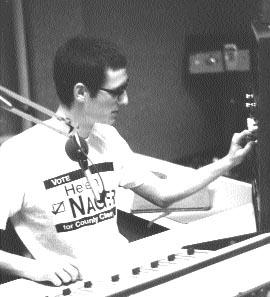 Cene Ketcham as he broadcasts his own radio show over WLFM.
Rachel Hoerman

Cene Ketcham as he broadcasts his own radio show over WLFM. (Clara Muggli)

Question: What is underground, but can be heard from above, and is plastered with enough colorfully sloganed indie band stickers to assure even the faintest at heart that Britney, Christina, and their boy-band counterparts have yet to take over?Answer: 91.1 WLFM, home of Lawrence University’s Independent radio station, and, for the past week, station manager Hannah Trobe.

Former RPM and world music director who’s been broadcasting her own radio show—”Transcontinental Tangerine Trip”—for the past three years, Trobe has been hard at work contacting promo companies, charting the top ten or twenty songs for each week, and organizing show scheduling for the upcoming year.

“Our station charts in the College Music Journal,” says Trobe, “so promotion companies send us cds they want us to listen to and hopefully chart in our ratings. We get a lot of stuff from independent bands too—licorice, suckers, Kool-Aid, and some strange things that they’ll send with their cds to try and get us to listen to them.”

Founded in the late 1950s and stocked with equipment from that era as well, WLFM shares airtime with Wisconsin public radio, and is entirely student-run. In addition to station managers Hannah Trobe and Michelle Vitegar (off-campus this term), music directors Kyle Simpson, Cene Ketcham, and Joe Wells oversee operations and help in choosing each year’s broadcasting line up.

WLFM’s schedule this year features an eclectic variety of shows, on everything from classical to rap music. “We have a lot of new people with shows this year,” comments Trobe, “and people seem super-excited. A few townies who have been here for years have shows, and we have a rap show, which is new, one real classical show, two jazz shows, and some electronic, industry, and heavy metal shows.” Specialty broadcasts featuring topics like lounge music, music in movies, divas, and completely alternative and indie rock Sundays round out WLFM’s new schedule.

In addition to their yearly turnover of new programming, one can tune in through WLFM’s new web-casting program, which is only available during student shows. Says Trobe: “Web-casting allows us to broadcast through a website, so your parents can listen to it, and your friends from anywhere in the world can turn it on.”

“A college station is a one-of-a-kind station,” adds Trobe, saying: “You can get away with playing what is not mainstream because you’re not getting money from commercials. You can play music people can’t hear on other stations. One of the great things about college radio is that you have much more freedom than commercial radio.