Wynton Marsalis convocation brings insight and a call for the blues 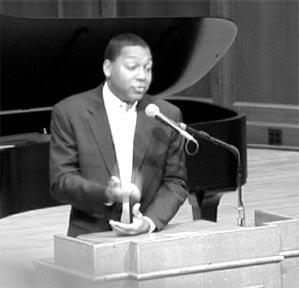 On Tuesday, jazz musician and composer Wynton Marsalis gave a convocation to a full Chapel. Marsalis’ lecture was insightful and surprised some listeners with its scope and subject. While many expected Marsalis to speak on music, Marsalis saved most of the music for Tuesday evening, and instead gave a talk entitled “The Need for a New Mythology.” The events of Sept. 11 were the focus for Marsalis, who as a musician is strongly identified with New York through the Lincoln Center Jazz Orchestra and his career there, beginning 20 years ago. Marsalis’s insights also extended farther than that, through the extensive touring that he has done and through his new role as a U.N. Messenger of Peace.

In the wake of the Sept. 11 tragedy, he said, the country had no unifying place to turn, such as religion or a common cultural bond. He talked about America’s diversity, saying that the steady flow of people of every kind through the U.S. is one reason why this country is difficult to defend. Marsalis also discussed the alienation here and in people around the world as something that he has seen firsthand in the student and professional jazz bands that he has visited.

In his master classes, Maraslis would listen to all the soloists and afterwards ask them if they knew what the other soloists were playing. So many times, they would not know, showing that they were not listening to and playing off of each other. Marsalis used this musical anecdote to explain the importance of communication in bigger areas. He said that for jazz, the key is listening, and Marsalis and his orchestra showed precisely what can happen when everyone is listening through the tightness of the performance that evening.

Marsalis described how he saw the rest of the world viewing America as a primarily wealthy nation without much national cultural identity beyond its fast food restaurants and what he thought of as money-driven popular culture. He presented many of his experiences, such as those at U.S. embassies and in conversation with Pakistani immigrants to show the view that America is a land of opportunity, but not one of strongly identified character.

In response, Marsalis called for a new mythology, one that included a richer artistic and cultural identity. As an example, Marsalis played the blues, a genre that he says has impacted music all over the world. He mentioned the noble actions that people have taken in the midst of tragic circumstances, and related that to the bittersweet quality of the blues scale and the blues form.

After his talk, Marsalis fielded a wide range of questions from students, faculty, and community members. The topics varied from questions about music to questions about slave reparations, to requests for autographs. Throughout the convocation, Marsalis spoke articulately and easily, engaging the audience with both his words and his performance.