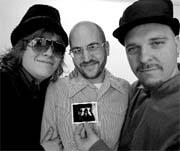 The Happy Apple Trio, a fusion of jazz and rock, performed last Tuesday to a totally pumped crowd at the Underground Coffeehouse. A band known for their stage presence, they were a force with which to be reckoned.
Sam Scranton

The Happy Apple Trio, a fusion of jazz and rock, performed last Tuesday to a totally pumped crowd at the Underground Coffeehouse. A band known for their stage presence, they were a force with which to be reckoned. (Michael Dvorak)

On Tuesday, May 12th in the Underground Coffee House, Happy Apple, an experimental jazz/awesome trio, rocked so hard that the coffee house and its contents silently exploded into a fine powder coating main hall green and cats, which slowly dispersed into the atmosphere to mingle with O3 and cfc’s. This will eventually lead to our extinction as it will prevent life-giving sunlight from reaching the earth’s surface. Oh well , it was worth it.The trio began the night with the title slice from their newest release, Youth Oriented. Immediately they started jamming as hard as as any band who has ever jammed hard before. Bass/ridiculous player Erik Fratzke layed down a extremely cool groove, while drum/unreasonable player David King did everything in his power to subvert it, in an extreme way. Meanwhile, Saxophone/ugly player Michael Lewis violently yelled and squacked extremely on his horn. It was extemely amazing.

Maybe right now you are wondering about my gratuitous use of the word extreme. Is it due to a lack of vocabulary? Possibly, but the correct answer is that this band exists to be extreme. They manage to be as extreme as a 25 year old teenager riding a mountain bike off of a cliff while slamming mountain dew, gogurt, and other things that one slams (dunks, doors, poetry etc.)

I should be careful though, I do not intend to give the reader the impression that they are only capable of abrasive, caustic dischord. Not at all, for to be truly extreme, they would have to addtitionally be capable of silence and serene melody.

They are. I love this band! They performed tunes which even convincingly employ polar extremes simultaneously, reconciling the irreconcilable, such as on their classic number Are we going steady?, which begins with some incredible saxophone lyricsim that is eventually fused with a seething, boiling, tumultuous beat. This song messed me up.

They didn’t let up! For two entire hours Happy Apple managed to confound the audience, which was an impressive feat conisdering that the audience was aware and looking for surprises. They always found some way to undermine our expectations, whether they punctuated their phrases with a resounding silence where a loud crash was called for, or took their music to places far removed and dubiously linked to the original melodic material much like a conversation that begins about poo, which to everyone’s shock turns into some heated philosophical dispute.

So many emotions. So many sentence fragments. This band even left my sentence structures demolished. (not that that is difficult to to do to me) I could only utter incoherences, and expletives following this f***ing unreasonable, illogical, devastatingly gorgeous/hideous show.