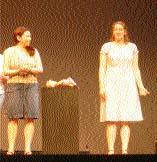 The glorious days of spring are here, and that means sunny days, cool nights, errant thoughts of love, clouds of insects begging to dance, and the inevitable return of Opera Scenes. That’s right; the annual event is back to entertain and to educate, with all the splendor that only the Lawrence Conservatory Voice Department can produce.In a nutshell, Opera Scenes is a performance of several different scenes from several different operas, with each scene performed by a different cast. Scenes are produced just as a full opera would be, including costumes and staging, with all music sung in the language in which it was written. The one difference is that accompaniment will be provided by piano only instead of orchestra.

Scenes are directed by members of the voice faculty. Patrice Michaels is directing The Turn of The Screw by British composer Benjamin Britten, and Dialogues des Carmlites by Poulenc. Rico Serbo is directing Mozart’s Die Zauberflte, along with L’Elisir d’amore by Donizetti. Karen Leigh-Post is directing Floyd’s Susannah and Mozart’s Don Giovanni.

Open auditions for Opera Scenes were held during the latter part of second term, and the scenes were chosen based upon the voices that were accepted. Singers were instructed to learn their music over Spring Break, after which rehearsals began.

Musical rehearsals began the first week of third term, twice a week for 30 minutes at a time. Bonnie Koestner, who has also been coaching accompanists, conducted these rehearsals. Staging rehearsals have been going on since fourth week.

So with two full operas a year, what purpose does Opera Scenes serve? According to sophomore Rebecca Herman, Opera Scenes provides “another opportunity for students to perform.” Because of the nature of Opera Scenes, a large number of people can be included, whereas in a single full opera, only a handful get to participate.

Opera Scenes provides the opportunity for those who were not in an opera to practice their stage skills and lets opera veterans brush up on repertoire and technique. The styles of opera in this performance form a wide spectrum, which allows students to experience the breadth of operatic literature.

Other perks of participating in Opera Scenes include working with different members of the voice faculty, working with other students, and of course, having fun. In short, Opera Scenes is a way to allow the largest number of people to gain as much experience as possible.

In order to help the audience appreciate each scene, the program will include a summary of the opera from which each scene is taken, along with a synopsis of the scene to be performed.

Come see Opera Scenes performed Thursday, May 22, at 8:00 p.m. in Stansbury Theatre. Admission is free and open to everyone.