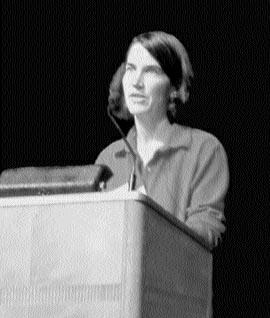 At the beginning of her lecture, “Islam and America,” Professor Kathryn Kueny stated that for most of the Lawrence University community, “Islam resides somewhere out east. somewhere away from here.” Her talk, given to a good-sized audience in Stansbury Theatre this past Tuesday, tried to shorten the distance between Islam and the majority of Americans. Kueny began by attempting to close the gap theologically. She constantly drew parallels between Jewish and Christian traditions and traditional Islamic beliefs. Jews, Christians, and Muslims, Kueny noted, all believe and accept that they believe in the same God. Kueny also mentioned several times the Muslim belief that Jews and Christians are “People of the Book,” and are therefore protected.

In addition, Kueny tried to place the Islamic religion closer to home. In the United States, she said, Islam has surpassed Judaism as the second most populous religion. Globally, Islam has more than one billion believers, second in the world. Interestingly, forty percent of the American Islamic population is African-American, not of Middle Eastern descent.

One common misconception of Islam is tied to Islamic unification. “There is no single Islam,” Kueny said. Although Islam does not have acknowledged “sects,” there are definite differences in the beliefs of Muslims worldwide. For example, some Muslim women work, while others never leave the house without their husband or father accompanying them. Kueny believes that this lack of unity, and the lack of a central religious figure like a pope to step forward and condemn extreme actions, has hurt Islam’s image in the wake of the Sept. 11 tragedy.

In what was perhaps the most interesting part of the lecture, Kueny discussed the justification of the terrorists for their actions. She compared extremists like Osama bin Laden to Timothy McVeigh and the Branch Davidians in the United States. She also tried to clear up the misconceptions, increased by the misuse of the word in the Western media, about the Islamic concept of “jihad.” There are two sides to jihad, she explained, the greater and the lesser. The greater jihad is the struggle within one’s self, whereas the lesser jihad is the struggle against those who are trying to destroy the religion. Mainstream Muslims tend to consider the greater jihad the more important of the two.

According to Kueny, some extremists see the culture of the United States as an attack on Islam. The citizens of the United States pay taxes to support the government, and so, share responsibility for the country’s actions with those in power. From this extremist viewpoint, the terrorists do not see those who died on Sept. 11 as innocent victims.

Still, it’s important to remember that these extremist views are not shared by mainstream Muslims, who believe that the jihad is an act of defense and that, unless they are combatants, innocent people are not to be harmed. Not all Muslims are suicide bombers.