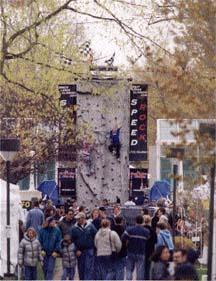 Once again, Lawrence will be host to Celebrate!, an annual festival in its 30th year filled with art, food, and music. Bands will be performing throughout the day.
Ray Feller

Once again, Lawrence will be host to Celebrate!, an annual festival in its 30th year filled with art, food, and music. Bands will be performing throughout the day. (Public Affairs)

This Saturday, there will be a lot to Celebrate! on the Lawrence campus.Celebrate! is celebrating its 30th anniversary. To recognize this date, this year’s Celebrate! is supposed to be a look back to the original fair. Celebrate! was started as a Renaissance–style festival. Although co-chair Andrea Hendrickson assures students that “no, we will not be dressing up,” there will still be signs of the past.

With the changes in SOUP’s budget, Celebrate! will not have as many performers as it has in the past. There will be only three stages: one at Wriston, one on the Shattuck porch, and a children’s stage that has been arranged entirely by committee member Kim Dunlap.

In the past, there have been up to four or more stages, but bad weather and lower funds have forced SOUP to size it down a bit. Even so, Hendrickson promises “A lot of fun, good food, good times. And, of course, we are all looking forward to mini donuts, funnel cake, and brats.”

One of the main changes Celebrate! has gone through even recently was the elimination of alcohol. This has been part of an effort to make Celebrate! more of a family event. Hendrickson adds that it has also made cleanup a lot more pleasant.

As well as Hendrickson, Megan Brown has been co-chairing the committee. About 12 students have served as committee members with Brown, Hendrickson, and Paul Shrode.

There are representatives from all across campus: Yuais, Sinfonia, Biology Club, the College Republicans, and other groups. Work began first term and has become steadily more involved over the past few weeks.

Students on the committee, which is open to everyone on campus, do a lot of the organizing. Vendors have to be contacted, permits have to be obtained, sponsorship sought, and schedules made and advertised. Students who are involved with SOUP will also be helping at the event itself.

Lawrence will have a couple of representatives in Bob Levy’s Big Band Reunion Group. The Sambistas will also be representing LU.

Hendrickson mentioned various highlights for this year, some new and some old. A “Shakespeare Man” will be seen wandering around soliloquizing and giving kisses to anyone who is interested. There will also be a funfair, a fire truck, and a horse-drawn carriage.

As an extension of Celebrate!, the performer Ellis will be returning to the coffeehouse on Sunday. Originally interested in becoming a part of Celebrate!, Ellis is very excited about coming back to the Lawrence campus.