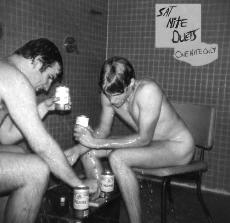 I could write a clever lead to preface this review, but in the slacker spirit of the band in question, I’m not going to do so. I think I’ll just go down a few Hamm’s in the shower with my bros and jam out to tunes. Maybe some slouchy ’90s American indie bands; you know, just guitars and drums and maybe some keyboards, man.
All joking aside, this week I finally checked out the Milwaukee group Sat. Nite Duets, per the recommendation of the Wisconsin music blog Muzzle of Bees. It’s almost difficult to pigeonhole these guys in a quick sentence, but to borrow from their hilariously minimal website biography, “Sat. Nite Duets is an American Rock Band from Milwaukee, WI.”
The band has two releases to their name, 2009’s self-released, self-titled album and 2010’s “All Nite Long” EP, which features some of the best album art I’ve seen in a while – check out the picture on the side of this article.
Sat. Nite Duets don’t have the most professional recording sound, and in fact, some of the songs on “All Nite Long” sound like they could have been rehearsed a few more times. But Sat. Nite Duets is the rare band that truly owns this sound and really makes it work. The crackling, lo-fi sound and freewheeling loose feeling is all part of the communal, good time-heavy experience.
They sound like your neighborhood garage band that listens to tons of Pavement, that has a pretty great sense of humor and that always throws great parties. Doesn’t every neighborhood have one of those?
“All Nite Long” opens with a goofy, loping guitar tune of the same name that is ostensibly about a party, but who knows for sure. A sample couplet: “Look, I am me / This is here, we are us / Funkytown, spooky life / Dig them first.”
The tune also features some classic “American Rock Band” moves: a spooky organ opening, multiple guitar solos and a nice huge shout chorus at the end.
Sat. Nite Duets plant themselves firmly in the sometimes-bizarre Pavement/Stephen Malk-mus style of humor throughout the record, adding hints of the Art Brut’s cultural awareness but with much less polish.
This oddball humor is perhaps the band’s biggest asset; in an age of overly serious indie bands, a band that calls one of their best tunes “BF Season” – short for “Boyfriend Season” – is a welcome breath of fresh air.
To get a better sense of Sat. Nite Duets’ weirdo humor, check out their website at satniteduets.tumblr.com, which also offers free downloads of both albums.
Luckily for Lawrentians, these Milwaukee dudes will bring their slacker rock and roll to campus Feb. 26 as a part of Band Booking Committee’s Broadly Local Music Festival. See you there; I’ll bring the Hamm’s.