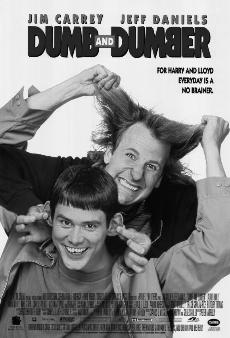 Sometimes a comedy comes along that is so stupid that it just works. “Dumb and Dumber” is one such film. For those who haven’t seen the film, the title should give away more than enough.
Written and directed by the Farrelly brothers in 1994, “Dumb and Dumber” follows the clueless pair Lloyd Christmas and Harry Dunne on their journey across the country to return a briefcase to a beautiful woman.
“Dumb and Dumber” tells the viewer everything he or she needs to know and expect from the film within the first few minutes. Lloyd, a limo driver, drives the tense Mary Swanson – played by Lauren Holly – to the airport.
Attempting to impress her, he tells her that he has aspirations of opening a store specializing in worm farms, called “I’ve Got Worms.” Lloyd immediately falls in love with her, and upon dropping her at the airport asks her for a hug.
As she walks through the airport, she places her briefcase down and continues on her way. Watching her from the car, Lloyd runs through the airport, grabs the briefcase and attempts to catch her before her flight departs.
Reaching the gate, he runs onto the jet way. When stopped by a flight attendant, he yells, “It’s okay, I’m a limo driver,” only to instantaneously fall off the jet way, as the plane has already taken off.
As the title suggests, Lloyd is dumb. But this seemingly unimportant scene sets up the entire plot of the film. Mary left the briefcase behind as part of a ransom, and the kidnappers were meant to pick it up at the airport. But when Lloyd comes along to complicate issues, they believe that he’s a professional who is interfering, rather than a clueless limo driver.
The dialogue between Lloyd and Harry is where the film really shines. As a child, I remember asking my father who was dumb and who was dumber, and over a decade and a half later, I still cannot tell. One of the most memorable scenes between the two happens after they pick up a hitchhiker, who is actually one of the men chasing them.
The three of them all sit in the front seat, with the hitchhiker sitting in the middle. First, Harry and Lloyd play tag. They each try to end the game and both end up throwing a tantrum. Then, Lloyd asks the hitchhiker if he wants to hear the most annoying sound in the world. Without waiting for an answer, he makes the shrieking noise. Harry joins in as well.
The scene ends with them singing, as they tell the hitchhiker that they don’t need a radio. The scene works extremely well in developing their cluelessness. The man is clearly bothered by them, but they continue to annoy him without noticing.
Over the years, “Dumb and Dumber” has been referred to as a classic low-brow film. And like any of these films, it has its pitfalls. Just as the viewer expects, Harry also falls in love with Mary, which results in plotting between the characters. But by the end, everything is resolved.
While problems of predictability like the romance plot occur throughout, these issues are far outweighed by the jokes. Rarely does a joke miss in the film, a far cry from the Farrelly brothers’ recent films. It is truly no surprise that “Dumb and Dumber” helped catapult Jim Carrey into stardom.