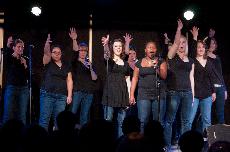 Up until last Thursday I’d been rather disappointed at the lack of a cappella music on campus. To be honest, I’d expected the cheesy choral covers of “Don’t Stop Believin'” and “Pokerface” would be an almost non-stop guilty pleasure. Yet, when I finally did find come across some a cappella music, it wasn’t at all what I had expected.
Conchordance, the all-female a cappella group on campus, were a pleasant surprise, with their artful renditions of everything from world music to pop. Last weekend, the group took their talent on a road trip to the International Championships of Collegiate A Cappella in Springfield, MO – and according to music director Katie Schuld, it was well worth the drive.
Conchordance first came together in Spring 2007, when current music director Katie Schuld was a freshman. Schuld was asked by Beth Melzer ’09 and Megan Hendrickson ’08 to help them bring a group together. The group is still going strong with ten members, and they hold auditions twice a year.
Conchordance is completely student run, with Associate Professor of Music and Associate Director of Choral Studies Phillip Swan, director of Cantala and Chair of the Music Education Department, serving as their adviser.
The group’s student leadership gives them quite a bit of freedom, according to Schuld. “I’ll show up to rehearsal and say, ‘Hey, I like this song, I think we should sing it’ and if everyone agrees . I usually arrange it or find [an arrangement] for female voices,” described Schuld.
Their repertoire for this year includes pop songs like Seal’s “Kiss by a Rose” and “Firework” by Katy Perry, as well as a number of more classical and world music pieces.
“We like to do all kinds of styles of music,” said Schuld. “One of our favorites is Bulgarian music.” Even with such a wide range of styles, Conchordance is also open to requests from students.
“We always tell people to just send us a message on our Facebook page or to e-mail us if they have song requests,” added Schuld.
As for the competition, it was Conchordance’s first year participating, and they were genuinely honored just to be asked. “We [were] told that this was the most selective they have ever been,” recalled Schuld. And even though they didn’t advance to the semi-finals they were content with their performance and loved meeting other a cappella singers from across the country.
As for the rest of this year, Conchordance plans to not only get their name out there but to bring a cappella music to life on campus. They intend to continue their “Night of A Capella” tradition in the spring and may even try to bring other a cappella groups to campus from schools across the Midwest.
So if you’d like to come see some real a cappella singing, you can catch Conchordance performing a Soundboard slot Feb. 27 in the Pusey Room at 9 p.m.