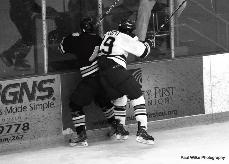 The Lawrence University hockey team dropped a pair of games to nationally ranked Adrian College last weekend. Adrian is ranked ninth in the U.S., but the Vikings showed no fear in going head-to-head with one of the elite teams in the country.
In the opener of the double-header, the Vikings appeared poised to pull off an upset, leading 3-1 midway through the second period. Sam Johnson, Ben DiMarco and Matt Hughes all scored for the Vikings as they pushed out to the two-goal advantage.
The Bulldogs cut the lead to a single goal entering the third period, but then scored twice in the final period to steal the victory. Lawrence pulled goaltender Evan Johnson with about a minute left to give themselves an extra attacker, but were unable to find an equalizer.
The shift in momentum carried over to the next day’s game as the Bulldogs (13-3-1, 10-1-1 MCHA) jumped out to a 3-0 lead over the Vikings. Hughes added a power-play goal in the third period, but Lawrence was never able to recover from its slow start.
The Vikings (9-7-1, 7-5-0) held a two-man advantage for two minutes due to an Adrian penalty for too many men on the ice, but Lawrence could not capitalize to cut into the lead and fell 3-1. Lawrence is back in action this weekend as they play a home-and-home series against Milwaukee School of Engineering. The series opens in Appleton 7 p.m. Friday, then moves to Milwaukee the next day for the second game.