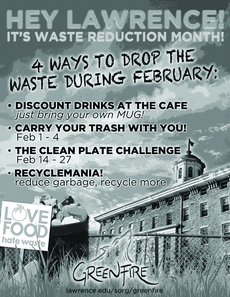 Throughout the month of February, Greenfire is promoting waste reduction all over campus. The club dubbed February “Waste Reduction Month” and aims to spread awareness about the amount of waste generated on campus and methods to reduce that waste.
Waste Reduction Month will involve two of Greenfire’s annual environmental initiatives: Recyclemania, a national competition in which Lawrence participates every year and the Clean Plate Challenge, a yearly calculation of the food waste weight in Andrew Commons.
Last term, Greenfire co-president Sophie Patterson suggested further reducing the price of coffee for students who order coffee in their own mugs “in hopes of increasing the amount of people who bring in a travel mug or a reusable mug,” she said.
Patrick Miner, Greenfire co-president, explained that the club decided to incorporate all three waste reduction initiatives into Waste Reduction Month. He explained, “We were thinking about all of these events and we thought we should combine them all into Waste Reduction Month, because they were all dealing with waste.”
Miner continued: “Recycle-mania is increasing the amount of recycling and reducing the amount of waste, the Clean Plate Challenge is reducing food waste and bringing your own mug to the café is reducing paper cup waste.”
Some Greenfire members welcomed the beginning of Waste Reduction Month with a visual and physical reminder of how easily waste accumulates.
Patterson explained, “This week, starting on Tuesday and going through Sunday, a bunch of Greenfire members are carrying around their trash – collecting all the waste that is not able to be recycled, not able to be composted, and is not toilet paper.”
Patterson noted that carrying her trash around has changed the way that she makes decisions about using disposable items.
Both Bon Appétit and an environmental studies class are collaborating with Greenfire for the Clean Plate Challenge. Miner explained that the environmental studies class, taught by Associate Professors of Geology Jeff Clark and Andrew Knudsen, has taken a leading role in analysis of the waste from Andrew Commons.
Miner noted: “The class that’s working with us on the Clean Plate Challenge collected data during fourth week, and then we’re collecting data during seventh week. We can compare data from those two weeks, and if there’s a decrease, that may mean that our advertising was effective.”
Waste Reduction Month encourages reflection about ways in which energy and resources are utilized at Lawrence. When asked about other sources of waste on campus, Patterson and Miner agreed that they would both like to see more responsible heating practices during the winter.
Said Miner, “There’s a fair amount of inefficient heating systems around campus. They’re very expensive to replace, but they’re slowly being replaced. Greenfire has a 90 percent efficient boiler and some of the other small houses are getting those over the next few years.”
Patterson agreed, saying, “I know a lot of the heating problems are inefficient heating and cooling systems, but also students [.] opening their windows if it’s too hot. If students know what to do and who to call to get things fixed, then a lot of problems could be decreased.”
On the other hand, Miner identified a positive trend in campus paper use. “Green Roots has tried pretty hard to get more double sided printing around campus and recycled paper,” he explained. “Pretty soon, all the paper on campus will be recycled and almost all the printers of campus print double sided, so there’s been a noticeable dip in paper usage.”
Students interested in getting involved with Greenfire, Waste Reduction Month or both have a variety of options, according to Patterson and Miner. Greenfire meets Thursdays at the Greenfire house at 8:30 p.m., but if students cannot attend, they can check out lawrence.edu/sorg/greenfire or e-mail greenfire@lawrence.edu for information about events and volunteering.