Bodin to seek new adventures away from Lawrence 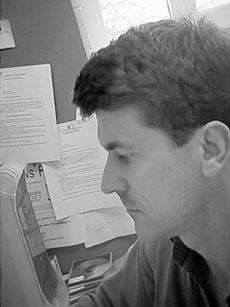 The Lawrence Conservatory is on the verge of losing one of its more well known professors a short two years after hiring him. Philippe Bodin, known to many as a composition teacher and to still more as a music historian, will be moving on. Before his departure, Lawrence will see at least one and probably two premier performances of his pieces. The first is “Switch,” a piece originally written for strings (and performed as such at Banff), and reworked for percussion ensemble. “In the old version, there was nothing keeping the pulse, but now it’s all about the pulse,” said Bodin of the reconceived piece.

One noticeable change from “Switch”’s original guise is Bodin’s addition of two conga drum parts, written after a careful study of the sound possibilities of the conga.

The second work, to be performed by the Jazz Ensemble (if Bodin’s finishes arranging it on time), is “King Vern.” Though not “jazz” by the strictest definition, “Vern” is a fusion of two of Bodin’s early compositional influences (Weather Report and Gentle Giant), conveyed via the medium of jazz ensemble.

Who is this tall, amiable Frenchman behind all this music, you ask? What is he about?

“My standards for music are completely different from most people,” Bodin begins, “I would say that in my whole life, I’ve experienced maybe four minutes of music.”

“When it happens,” he explains, “time stops.”

“It happened to me when I played a competition. In the final round, time stopped, but it was annoying because then I was not controlling anything. I woke up and I screwed up.”

Bodin’s second musical epiphany occurred at a recital given by Robert Shannon at Oberlin. Then, Bodin was free to experience the stasis of time for “a whole movement.”

What composers, if any, measure up to his astronomical standard?

“Bach,” Bodin answers right away, then thinks for a moment. “Schubert.” More thought. “Mozart…not all of it, but [I like] the Jupiter Symphony.”

The “jazz influence” over Bodin’s compositional vocabulary was also evident to many who watched the chorale perform his “Motetus In Laude Sancti Martini” at last Saturday’s choir concert. Bodin confesses his infatuation with the recordings of jazz pianist Bill Evans and demonstrated Evans’s own direct link to Claude Debussy by comparing a Debussy piece and Evans’s transcription side-by-side. It’s a chicken-egg question: which became “hip” first? Jazz or “classical” music? (Which composers/performers originated the quartal spacing and extensory structures so ubiquitous to jazz since the late 1940s?) Both did, explains Bodin, “I think Bill Evans’ voicings are out of this world. [Debussy’s] chords sound like some chords we have that have a function, but [he went] at it in a modal way, not in a [functional] way.”

At my request, Bodin plays the last chord to his “Motetus,” a D minor 13th chord to my ear, a cool sonority to highlight his point.

Equally memorable is Talaria (2000), a piece written for and performed by the Lawrence Wind Ensemble, which, despite its quality as a piece, will probably live in infamy in the memories of the people who performed it.

“The performance has to respect all the structures that go into the piece,” Bodin says of the difficulty of performing a piece faithfully. If “the bass is too loud [or] out of tune” or insufficient heed is paid to “tempo changes”, a piece that looks very good on paper is “not happening.”

Each of Bodin’s pieces displays the same grounded adventurousness, the same propensity for both the traditional and the avant-garde. By weaving together lines (usually via canon), and “messing” with them (using the tried and true techniques developed in the first half of the twentieth century), Bodin is able to create something totally unique.

Uniqueness is not the point, though, as he puts it. “I think the idea of being original has absolutely nothing to do with art,” he says flatly. “I don’t think it’s the point at all.”

Where will Bodin’s talents and offbeat sense of adventure take him next year? As one of five winners of the Music of Changes competition in Los Angeles, Bodin now has more commissions than he could complete with a teaching job. Consequently, he plans to settle down (maybe on the East Coast) somewhere and work.