LU looking ahead to MWC meet this weekend 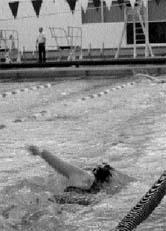 The Lawrence University swimming and diving team is looking forward to this weekend’s Midwest Conference Swimming and Diving Championship meet this weekend here at Lawrence. They are looking forward to it not just because it marks the end of a dry month for the team but because many individuals have a chance to compete for a conference championship. Several Vikings are coming off conference titles last winter, or have had near finishes in events. Adam Kolb leads the Vikings men’s chances. The sophomore finished second in the 500 free last year behind LU graduate Tom Carroll. He also is on several free relays that the Vikings normally do very well in. The Vikings 800 free relay won the Conference championship last winter. The men also have David Danenhower who took second in the 400 IM as a freshman, and Nick Heuer who won the 100 breaststroke last year.

The women have Jodie Primus to root for. Primus has won several events all ready this season, and is coming off of two conference titles last winter. She won the 200 IM, and the 100 Breaststroke for the Vikings. Tiffany Pannier is another Viking to look out for, as is freshman Meggin Brittain.

The Vikings also will have a diver competing for a top three spot. Paul Salomon who has already won a Wisconsin Private College title in the one-meter this season will be diving for LU in chase of Grinnell champion Eric Blevens. Blevens earlier this season broke the conference record on the one-meter board, so Salomon knows his work will be tough.

The Vikings should fare well, and both teams should finish in the top three in the conference again this year, with the men having a good shot at second place behind perpetually good Grinnell. The meet starts with preliminaries this morning and will continue throughout the weekend into Sunday evening.