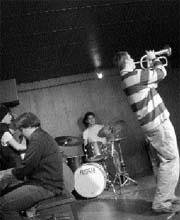 Jazzers convene from the four corners of campus to lay down hip beats and smooth jams for students all Thursday evenings, from 10 to midnight.
Devin Burke

Jazzers convene from the four corners of campus to lay down hip beats and smooth jams for students all Thursday evenings, from 10 to midnight. (Julien Poncet)

People at Lawrence finally seem to be waking up to the fact that one night a week, the Coffeehouse turns into a jazz club. This year, the jazz open jam sessions that the Underground Coffeehouse has hosted for years are drawing audiences of more than just musicians. Peter Halloin, who plays drums every week, says that the crowds have been much bigger this year than in years past, and more people are coming to listen, not just to play. “Sometimes, the Coffeehouse would be packed with people just listening,” he said.

Four years ago, the Coffeehouse jam sessions happened every Tuesday night. The trio of Nate Smith on drums, Mike Pfaff on piano, and Dan Asher on bass were its regulars. The audiences averaged 3 or 4 people, many of whom were musicians themselves, waiting to play.

The following year, cellist Matt Knippel reserved the Coffeehouse on Mondays for jam sessions, but there was still limited interest. Last year, Halloin and Tucker Yaro set up jam sessions, still on Mondays, and more people started to come, both the play and to listen.

This year, a trio of Halloin, Yaro on bass, and Charlie Christensen on piano shows up every week and is usually joined by a few regulars, including Kyle Simpson and Doug Detrick on trumpets and Andy McGhie on sax. As many as four or five horns have joined the trio, making a group of eight jamming on stage.

The jammers usually come prepared for anything, and if there’s a crowd, they’ll play it up. They can take requests, and there are no rules about style: anything goes. Sometimes, vocalistswill show up to sing with the group, always a welcome addition.

Right now, the larger crowds that were coming to listen during first term have shrunk somewhat, but are still fairly sizeable compared to other years. Halloin says that the musicians enjoy playing to people who are listening, and they hope people more people will come.

The jazz open jam sessions are every Thursday night in the Underground Coffeehouse, starting at 10 pm.