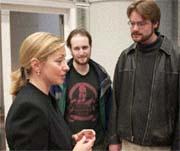 Jill Beck meets students during the reception following the announcement that she will be the next Lawrence president. Students hope that Beck will be personally involved with students during her administration.
Jonathan Isaacson

Jill Beck meets students during the reception following the announcement that she will be the next Lawrence president. Students hope that Beck will be personally involved with students during her administration.

As Lawrence University prepares for the transition from President Rik Warch’s administration to tthat of the recently introduced Jill Beck, students have expressed a few things they would like to see changed.Many of the suggestions and complaints that students have raised are the same issues that have repeatedly arisen in many a discussion and student forum, but The Lawrentian felt it would be best to ask a variety of students to sound off.

The issues that students are concerned about cover everything from the academics, to athletics, and the social character of the university.

One of the major issues that has come up time and again in LUCC and is one of the major sources of conflict between students and faculty in the recent flap between the two groups over the changes in the senior class programming has been a perceived lack of communication between the school administrators and students.

Several students recently voiced their hope that the incoming president will help foster an open dialog.

Sophomore Casey Cooper-Fenske expressed these sentiments, as did several other students, saying that she would like to see “More direct involvement between [the students] and the president.”

Emma Sweet, a senior who is applying for a residence hall director position, also hoped that Dr. Beck would stay involved personally with the student body, citing Warch’s periodic reading of bedtime stories in Ormsby Hall.

Other traditional student gripes were brought up as well. Parking, laundry and residence life issues were all topics of student concern, as they have been consistently in recent years.

Jay Ellsmore said, “I would like to see some type of increase in student parking.” Tristan Eggener also brought up his concerns over parking as well as his dislike of the current system of tokens for laundry.

Another issue that is often on the mind of the Lawrence community is the issue of funding for various departments around campus as well as for the university as a whole.

Rachel Koon expressed the desire to see more funding go towards the art department, traditionally a smaller department on the Lawrence Campus. Aaron Jubb expressed his desire to see the funding for the math and science programs continue at the same level.

Alex Wille, a graduating senior, had this to say. “I want witty speeches and diligent fundraising,” in a light hearted manner.

Also on students list of concerns are facilities and the equipment that is available to students. Jacob Teichroew, a conservatory student, expressed his displeasure with the current state of affairs in the conservatory computer library.

“We need working MIDI keyboards and updated versions of Finale, [a music writing software],” he said.

Alan Jameson expressed a hope that the rec center and training facilities would see at least some improvements in the coming years.

Another concern that was raised is also potentially impacted by the proposed expansion of the College Avenue bridge, which could potentially increase the traffic flow through campus. Ellsmore, a conservatory student, said that he would like to see cars have to stop to allow students to cross the street, although he was unsure whether or not the president of the university would have that capability.

“They make a big deal out of [the naming of the new president], but what do they do?” she asked.

As to what the president actually does, many of the issues raised by students are not directly decided by the president, but rather are dealt with by the various deans and other administrators. The president will have some say in the issues, but the president does not make the actual decisions.