Lawrence became one of the first colleges in the Midwest to offer “triple-certified” coffee this Tuesday when it debuted at the Underground coffeehouse to a crowd that event organizers say exceeded their hopes. Steve Rogness, a member of Lawrence environmental group Greenfire and an organizer of Tuesday’s event, explained that since the World Trade Organization was established in 1997, the coffee market has expanded substantially, and prices have been driven down to a point that barely keeps coffee farmers out of poverty.

Higher market supply without a change in demand leads to lower prices, which consequently make it more difficult for coffee farmers to subsist.

According to Rogness, Fair Trade is a trading partnership that seeks equity in international trade. Organic and shade-grown agriculture encourage environmental protection. Shade-grown means the beans are grown beneath the rainforest canopy.

Rogness also stated that growing beans in the shade avoids the alternative of “slash-and-burn” agriculture, which destroys irreplaceable rainforest ecosystems.

Rogness addressed concerns some hold that the Sara Lee Corporation, parent company of Lawrence’s fair trade distributor, is not known for their model labor practices. He said that although the system is imperfect, it is a step in the right direction. The farmers who will get the extra 10 cents per cup paid for Fair Trade coffee will benefit from Lawrence students’ purchases.

“Steps like this are extremely important for Lawrence. Students often complain that they feel isolated from the world, or similarly, that they lack the ability to make living choices at Lawrence that will have a positive impact,” said Rogness. “Options like triple-certified coffee offer students the opportunity to live intentionally, and to make decisions in their daily lives that will positively affect the world.

“Events like the Fair Trade coffee kick-off are meant to show students that they are not isolated from world events, as many feel they are here at Lawrence. We all have the power to change things for the better.”

Greenfire representatives noted that this is only the beginning of changes their organization hopes to make on campus. Rogness noted that Yale University’s equivalent to LUCC just passed a resolution requesting that the administration work toward making all campus dining facilities Fair Trade compliant, and mentioned that Greenfire may urge Lawrence to head in that direction as well. 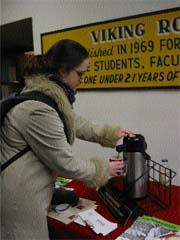 Marisa Linley tastes the new brew, being offered for free Tuesday night at The Underground Coffeehouse as a gesture supporting equity in international trade. (Quinn Lake)