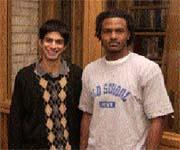 Last week, Lawrentians elected Joel Rogers the next Lawrence University Community Council president and Tariq Engineer the next vice president. Rogers defeated Bill Dahlsen at the polls by thirty-one votes. Engineer ran unopposed.In an interview, Rogers outlined a wide array of issues that he would like to address in his term, which begins third term this year.

He noted that the new president might bring in administrative changes at the school. Rogers plans to work for to make changes that he sees as inevitable changes that lead to progress.

“Progress requires change, but change doesn’t mean progress,” he stated. Rogers also outlined a list of ideas that he would like to see LUCC address, many of which he also outlined at the candidate forum on January 11.

Rogers did not have a concrete plan for working on the perennial problem of parking, but he did say that if the Hacquebord administration could not reach a solution that will hold in the long term, he would address the issue as it became pertinent.

“We should work to come to a conclusion with parking that we don’t have to come back to every year,” Rogers said. Rogers expressed his desire to see LUCC address issues such as diversity within the Lawrence community and class sizes as enrollment increases.

Rogers expressed a desire to see LUCC give the students a formal voice in matters that affect the entire campus. Rogers also stated that he hoped to work with Dahlsen on improved communications between the conservatory and LUCC, a plan that Dahlsen had explained at the candidate forum.

Rogers shocked some in attendance at the candidate forum when he suggested that the issue of the inadequate training facilities for athletes could be possibly addressed by having one fewer convocation speaker for one year.

He explained further in an interview that the idea would be to invite one fewer speaker for one year, and one year only. He cited the safety of the weight room as being a major concern for athletes and said, “[The inadequate facility] needs to be remedied immediately.”

He stressed that his idea of having one fewer convocation speaker for only one year. He also said that he would like to explore the possibilities of working with Fox Valley Technical Institute in trying to offer sign language as an alternative to the foreign language requirement.

Tariq Engineer, the next vice president, explained his goals in three parts. His first goal, he explained, is “To make the legislation as easy and simple as possible.” Engineer explained that lots of procedures exist in the legislation that are no longer followed and should be removed.

He also explained his plan to work on student organization debt. He explained that as the budget currently works, groups that start the year in debt have a very difficult time getting out of debt.

Engineer said he plans to work with Paul Shrode, Associate Dean of Students for Activities, to make it so organizations begin the year with zero debt.

The final goal he explained was his hope to make groups more responsible for their own budgets.

“We’re not kids anymore,” he said, “Groups have a responsibility to see that the money is spent responsibly.