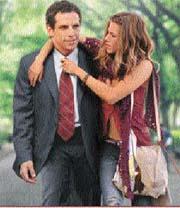 Along Came Polly boasts nothing substantial in the romantic comedy genre. Boy meets girl, boy likes girl, complications arise, and complications are resolved. In fact, the only truly enjoyable aspect of the film is a ferret named Rodolofo, and that is only because ferrets themselves are such strangely amusing creatures. After Reuben (Ben Stiller) marries the woman of his dreams (Debra Messing), she cheats on him with the sexy scuba instructor (Hank Azaria) she meets on their honeymoon. Reuben’s affections then turn to Polly (Jennifer Aniston), whose free spirited character and unstable lifestyle is the exact opposite of Reuben’s uptight and conventional one.

The greatest problem with the plot is not that it is hopelessly ordinary, but that it cannot decide whether to walk the line of forgettable romantic comedies come before – such as Two Weeks Notice or How to Lose a Guy in Ten Days – or embrace the raunchy romantic air of American Pie. Not only should the film definitively decide on a specific comedic course, but if it attempts the latter, it faces the impossible task of being far more tasteless in order to attract notoriety, which not even the coining of the word “sharted” can accomplish.

Such a foolish plot can only remain afloat when graced with extraordinary actors, and even that cannot always guarantee success. Stiller is as entertaining as ever, displaying a greater grasp on comedic timing than most actors can boast. Azaria is amusing, Messing is forgettable, and as for Aniston, apparently there will be life after Friends. She plays the standard romantic heroine, very similar to that of Rachel Greene, but has enough talent to breathe a different sort of life into the character rather than copy her own typical performance in such a role.

Phillip Seymour Hoffman plays Stiller’s best friend, a washed-up actor whose appearance and general behavior leave him the constant butt of tasteless jokes. Hoffman, usually a very serious – and in that capacity, good – actor, is utterly out of his depth in this sort of role. Rather than approach the unfamiliar role with his own style, he mimics Jack Black. Unfortunately for Hoffman, Black’s ridiculous behavior is equally as stupid but far more natural and endearing.

Along Came Polly offered enough humor to keep me awake, but not enough to compensate for the cost of my ticket. Wait for the video. C+