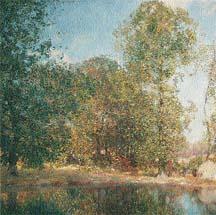 For a small liberal arts college located in Wisconsin, Lawrence University’s art collection boasts some pretty impressive pieces, many of which were discovered during a recent inventory. One such find – a work by Lawrence Mazzanovich – is an example of the American impressionist school that formed in the United States in the late 18th and early 20th centuries.

Impressionism proper began in Europe, when a new school of painters developed whose chief concern was capturing the transience of the real world through careful and accurately rendered depictions of color and light.

Artists like Degas, Monet, and Renior, to name a few, pioneered an artistic technique of light, feathery brushstrokes combined with a sophisticated color palette to capture their fleeting impressions of a particular time, place, and locale.

(For more information on the impressionist movement, as well as a cool program that allows you to create your own impressionist painting, go to: http://www.biography.com/impressionists/makea.html).

By 1900, artistic colonies dedicated to the impressionist school began forming, and American artists began placing an American spin on impressionist ideas and techniques from across the ocean.

Mazzanovich was born in 1872 to immigrant parents on a ship off the coast of California. After living in several different cities, his family eventually came to Chicago, where he took classes at the Art Institute.

Mazzanovich moved to Paris in 1902, and spent some time at artistic colonies in the French countryside. He later claimed that while in France he met and studied with Monet at his studio in Giverny.

While abroad, Mazzanovich visited major art museums and was exposed to the ideology and techniques of European impressionists. He brought that knowledge back to the United States in 1909.

Upon his return to the U.S., he settled in a small art colony in Westport, Conn., and continued experimenting with tone, color, and a considerably calmer and more grounded color palette than his European counterparts.

In 1923, Mazzanovich moved to Tryon, North Carolina, where he continued creating landscape art in the impressionist style. Mazzanovich died in Tryon in 1959.

The Mazzanovich painting in Lawrence’s possession was one of seven bequeathed to the university by Martin Ryerson, an American collector of impressionist art in the 1930s, as well as a major donor to the Art Institute of Chicago’s impressionist collection. The piece was found in less than ideal condition a few years ago, and had to be sent away to be cleaned and relined.

The work, which is untitled and most likely executed in the early 20th century, is, according to Wriston Art Gallery curator Frank Lewis, “an excellent example of second tier impressionism.”

Mazzanovich portrays his subject matter, a calm pond in the forest beneath a sunny sky, with tiny strokes of individual color, and in some places, actual sketch-like brushstrokes.

Lewis comments, “Mazzanovich’s technique is a combination of Monet’s impressionist technique with Seurat’s pointillism. The piece is indicative of true American impressionists who were more descriptive with color and more interested in the optical effect of their work.

“American Impressionists, including Mazzanovich, weren’t as experimental as the Europeans, and practiced a more disciplined kind of impressionism.