Pinker to address nature vs. nurture 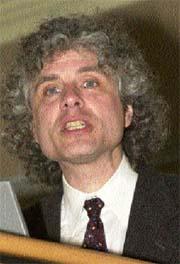 Cognitive scientist, psychologist, and author Steven Pinker will present the third convocation lecture of the year on Tuesday at 11:10 in the Lawrence Memorial Chapel, followed by a question-and-answer session. In his lecture, “The Blank Slate,” Pinker will address the concept of nature vs. nurture.Pinker, a highly praised author and one of the world’s foremost experts on the human mind, has produced four best-selling books, all of which have presented new and controversial views on the effects of biological factors on human behavior. Tuesday’s lecture will focus on his most recent work, “The Blank Slate: The Modern Denial of Human Nature,” a 2003 Pulitzer Prize finalist for nonfiction, recipient of the American Psychology Association’s William James Book Prize, and recipient of the Eleanor Maccoby Book Award.

“The Blank Slate” addresses the age-old argument of nature vs. nurture, carefully reasoning that the human mind is not a blank slate at birth, but instead the genetic history of humankind. Pinker opposes conventional theories of human behavior by claiming that individuals become who they are not because of environmental or cultural influences, but instead behave based on innate genetic influences.

Pinker’s earlier works have focused on visual cognition and language. His first book, “The Language Instinct,” which argued that language is a biological adaptation, was included in The New York Times Book Review’s “Editor’s Choice” list of the 10 best books of 1994. His second book, “How the Mind Works,” published in 1997, explored how people think, feel, laugh, question, and enjoy. “How the Mind Works” was a Pulitzer Prize finalist as well as one of the ten best books of the decade according to Amazon.com. Pinker published “Words and Rules: The Ingredients of Language” in 1999, and it explains how human language works through Pinker’s own research on regular and irregular verbs.

Pinker is a native of Montreal and received his undergraduate degree from McGill University in Montreal. He earned his doctorate at Harvard and conducted postdoctoral work at Massachusetts Institute of Technology. Pinker returned to Harvard last year as the Johnstone Family Professor of Psychology after serving as psychology professor at MIT since 1982.

As an eminent psychology professor, Pinker has received multiple science awards, including the National Academy of Sciences’ Troland Award, and the American Academy of Achievement’s Golden Plate Award. Pinker was also named one of the “100 Americans for the Next Century” by Newsweek magazine.

Steven Pinker will present “The Blank Slate” on Tuesday, January 20 at 11:10 a.m. in the Memorial Chapel followed by a question-and-answer period at 2:00 p.m. in Riverview Lounge in the Memorial Union. Both events are free and open to the public.