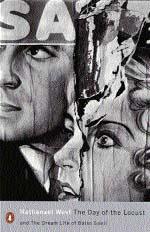 If there is one socio-philosophical theory that is more intellectually dishonest and nonsensical than European existentialist pessimism, it is American round-yellow-smiley-face brainless optimism. The latter attitude is brilliantly skewered in Nathanael West’s comic social satires Miss Lonelyheart and The Day of the Locust, two short novels currently published in a single volume. This book is so bitter that I had to rub my eyes with honey after reading it. Written in the 1930’s, Miss Lonelyhearts and The Day of the Locust are just as fresh and perceptive today. West takes on the shallow theosophical cult of mind cure, the idea of achieving salvation through the pursuit of pleasure, and the socially imposed duty of success at all costs. West’s work is not a harmless froth of sunny preachiness. His words are so engagingly acerbic that the ink practically burns through the paper.

Miss Lonelyhearts is my favorite of the two stories, probably because of its premise. ‘Miss Lonelyhearts’ is the popular advice columnist of a big city newspaper. The paper’s staff strives to create the impression that Miss Lonelyhearts is a kindly, elderly woman who lives to bring happiness into the lives of her more unfortunate readers.

Somehow, a wise, Scripture-quoting paragraph from “her” will make any problem all better. Thing is, ‘Miss Lonelyhearts’ is really a twenty-five year old man with a legion of his own personal problems who would be writing letters to himself if he didn’t know what a fraud he was. He’s sort of engaged to a very nice young woman, but he views himself as unworthy of her, so he pursues a series of affairs with various messed-up individuals. The liquor and cigarettes he voraciously consumes only dull his misery.

Interestingly, West seems to be skewering college as well. The picture West paints of life for the young person recently out of college, as he himself is, is nothing short of horrifying for undergraduates. West argues that colleges don’t teach students how to make their skills and interests pay. Students are bred to be helpless dilettantes. Graduates are only given enough skills to become comfortable wage slaves. Just a little observation to brighten the day of all the seniors who might be reading this. You’re welcome.

It’s pretty clear that there’s not going to be a happy ending. It’s blatantly obvious that ‘Miss Lonelyhearts’ doesn’t deserve a happy ending. But reading West is not like observing a train wreck in slow motion. It’s a joyous deconstruction of some thoroughly miserable characters. The sarcastic monologues of the newspaper’s editor alone are enough to make the book a classic.

Though almost twice as long, The Day of the Locust is to me much less memorable than it’s sibling satire, though it still has much to recommend it. It’s sometimes cited as the greatest lampoon of Hollywood ever written. It doesn’t focus on the film industry so much as the odd collection of people that seems to be drawn to Hollywood like rats to a dumpster. Would-be stars, opportunists, deadbeats, and depressives who came out to the West Coast to die are gathered together in desperation brought about by the shiftless, purposeless existence that is a part of the Hollywood lifestyle.

Depression flourishes, and the ordinary collection of vices fail to bring pleasure for long. Eventually the characters grow more and more corrupt, looking for pleasure in the most sordid places. When love, family, and rewarding work are supplanted by lust, anonymous acquaintanceship and money-snatching schemes; can apocalyptic violence be far behind? West certainly thinks so. Don’t scoff at him, read him, and laugh while he moralizes.

Very few people have read West’s works today, and that’s a real shame. His barbs are just as sharp today as they were sixty years ago. He is a master satirist and social critic, able to condemn the guilty without casting a shadow upon the innocent. West is one of the few authors in shining armor with the skill to impale the blemishes of modern society.