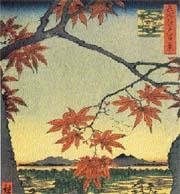 A new exhibit is set to premiere in the Wriston Art Center Galleries this Friday. In a show of eclecticism characteristic of the gallery’s varied permanent collection and its ability to bring in outside artists, the art from the exhibit’s three sections spans two centuries, two continents, and three different mediums.The first gallery will house etchings from the university’s permanent collection by early 20th century artist Coit Brown. A professor of drawing and painting at Stanford University in the late 19th and early 20th century, Brown was an avid outdoor enthusiast who traveled extensively in Europe, had a mountain in the Sierra Nevadas named after him, and founded an art colony in Woodstock, New York.

Although they have the soft and fuzzy appearance of a finely-sketched pencil drawing, Brown’s works are carefully rendered etchings of outdoor landscapes and scenery, images which earned him lasting fame in the art world.

The landscape prints of Ando Hiroshige comprise the second part of the exhibit. A 19th century Japanese printmaker, Hiroshige’s images were the postcards of pre-modern Japan. In order to gather sketches for his landscape print series, the artist traveled with a royal entourage of horses along what was the world’s largest highway at the time – the Tokaido, or “Eastern Sea Route.”

The images Hiroshige captured along the road that linked the imperial cities of Kyoto and Edo (present-day Tokyo) formed the basis for several of his landscape series, most notably The 53 Stations of the Tokaido. Looked down upon by the ruling elite of the time – and comparable to the Thomas Kinkade and Terry Redlin images of our time – Hiroshige’s works provide idealized images of a long vanished world.

The third and final segment of the exhibit is comprised of works by Kristy Deetz. A professor of painting at the University of Wisconsin-Green Bay, Deetz’s work is an exploration of texture, color and composition on wooden panels. Deetz incorporates outside objects made of wood, wax and metal into her works, which mimic in materials, but not in imagery, the icons and altarpieces of old.

The show will open this Friday with a lecture by guest artist Deetz at 6 p.m., with a reception afterwards. The show runs from January 16 through March 14, and the gallery is free and open to the public from 10 a.m. to 4 p.m. Tuesday – Friday and from 12 – 4 p.m. Saturday and Sunday.