Dr. Jill Beck was welcomed as the 15th president of Lawrence University at a reception Friday.
Isaacson, Jonathan and Jessie Augustine

Dr. Jill Beck was welcomed as the 15th president of Lawrence University at a reception Friday.

The appointment of Dr. Jill Beck as the fifteenth president of Lawrence University was announced to the Lawrence community last Friday by Jeffery Riester, chairman of the board of trustees, to a large crowd in Memorial Chapel.Riester introduced Beck to the audience in a brief speech that outlined her career, the selection committee’s recommendation and the trustee’s approval of the recommendation that Beck be chosen as the successor to Rik Warch, who leaves the post of president after a quarter of a century.

Riester told the gathered audience, “She is the right person for Lawrence as the college enters its 158th year…Those of us who have had the privilege of meeting with her during the search have been impressed by her boundless energy and enthusiasm and optimism and also by the confidence, knowledge, and judgment she exhibits.”

Beck, a graduate of Clark University, told the audience that her experiences at a liberal arts school made a large difference in her life and that she hopes to follow in Warch’s footsteps of “energetic advocacy of liberal arts education.”

She further explained her beliefs that students at a liberal arts institution should not pursue knowledge disinterestedly.

She said, “One goal of a great university should be to graduate altruistic citizens, young adults with generous hearts to complement their developed minds.”

After the speeches, Lawrentians greeted Beck in a reception, where many students and faculty members were able to meet the new president in person.

In an interview with The Lawrentian, Beck stated that she was attracted to Lawrence “because of its sterling reputation as a liberal arts institution,” especially because her own background is in the liberal arts. The conservatory also presents exciting opportunities and challenges to the school and administration. Beck would like to see more integration of music and arts into the sciences and humanities while still giving equivalent respect to al disciplines.

When asked how she will approach her new position, Beck said the first thing she would like to do is learn more about the culture of Lawrence, e.g. student aspirations. She wants to understand what President Warch has accomplished and then speak with students and staff members to find the school’s strengths and weaknesses.

Beck also emphasized the importance of open communication between students and administration. “Often times people can be frustrated with a decision because it is not clear on what basis the decision would be made,” said Beck. She hopes to keep students and faculty abreast of important decisions through email and regular meetings.

Beck comes to Lawrence from the University of California at Irvine where she served as the dean of the School of the Arts. Under her leadership, undergraduate applications to the School of Arts increased by seventy percent in just four years.

Before her tenure as dean, Beck was appointed professor of dance at UCI and has also taught at the City College of New York and the Julliard School, among others. She has written extensively on dance history, theory, repertory, and technique and has directed ballet and modern dance repertory. 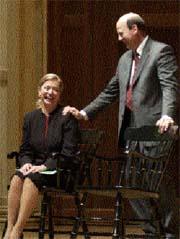 Jeff Riester, Chairman of the Board of Trustees, welcomes Dr. Jill Beck.