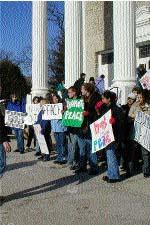 Protesters, acknowledged by Estrich during the convo, gather outside the chapel to protest the potential war in Iraq.
Peter Gillette

Protesters, acknowledged by Estrich during the convo, gather outside the chapel to protest the potential war in Iraq.

Susan Estrich, Professor of Law and Political Science at University of Southern California, delivered a convocation yesterday entitled “Civil Liberties in the Times of Terror: The Balance Between Security and Freedom.”Estrich, who is perhaps best known for her work opposite Dick Morris as a commentator for Fox News, acknowledged the complexity of Civil Liberties, and how they factor into issues ranging from surveillance to racial profiling, to government secrecy and the argument over tribunals.

She also encouraged Lawrence students to become more politically involved. Estrich held up as a model the group of Lawrentians who protested the war in Iraq on the chapel steps prior to her address.

Estrich explored the dilemma of who to search. “Americans believe that it is fundamentally wrong to draw lines on the basis of race, religion, and ethnic background,” Estrich said, acknowledging that often it is more expedient to only look at certain segments of society.

Another major issue around such “racial profiling” is “Who is doing the choosing?” That was a major point of Estrich’s, a question she used towards military tribunals, police departments, government accountability, and finally civil service.

The impulse to scale back civil liberties, as President Warch’s introduction attested, is by no means a new one in American history. “We are as capable of hysteria as the next crowd – what will we look back on that we did today?” Estrich told The Lawrentian before her convocation.

Throughout her speech, she cautioned against hysteria: “Thankfully, there has been nonational round-up of Arabs,” Estrich said, “but what’s surprising is how conservative opponents of big government did a 180 degree turn after 9-11,” Estrich said, saying that 9-11 was “not caused by conspiracy, but stupidity.”

“The Constitution and freedom became an easy whipping boy – or girl, as it were. ‘Let’s not scapegoat, therefore let’s not look,’” she said before the convocation of why civil liberties often get scaled back, rather the failures addressed.

Estrich also disagreed with the movement towards military tribunals, saying that President George W. Bush ought to trust the judges his father and President Reagan appointed. “I wouldn’t ask the federal judiciary to run a war… So why would you expect the military to interpret the constitution?”

“ There is a new anti-war movement in students. What we aren’t seeing is organization from Washington. So to the extent it seems to be almost sprouting up on college campuses,” she told The Lawrentian.