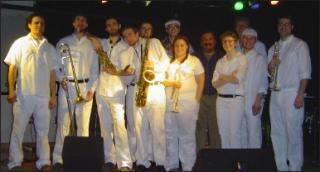 If the rigors of a liberal arts education have gotten you feeling blue this winter, a certain group of Lawrence musicians may have the perfect cure. The student-run salsa band known as Vale Todo has been rehearsing and steadily gaining attention in Appleton over the past couple years. The group reached a new level of exposure recently when they were hired for weekly appearances downtown at CasaBlanca. This week, percussionists Scott Palmer and Mike Truesdell gave The Lawrentian some insight into the fiery beast that is Vale Todo
When and how did Vale Todo get started?
S.P.: There has been a salsa-type band going on for the past five years, learning the occasional couple of tunes for a recital or something. Last year we officially called ourselves Vale Todo and started playing out.
M.T.: As I understand it, Vale Todo began as a salsa band that rehearsed sporadically, and rarely performed. Since Greg Erskine, Scott Palmer, and Nick Kraus took control of the reins, it has come into its own.
How has the group progressed since you started?
S.P.: We have gone through a few members as people have graduated, and we have added a singer, Carlos, which is great. It is a lot different playing tunes with vocals – the horns are free to play more like a big band with background hits and harder parts instead of always having to carry the tune.
What kind of music do you play?
S.P.: We play salsa! A Cuban/New York style salsa and Latin jazz with influences from Tito Puente, Ray Barretto, Rubn Blades, Eddi Palmieri, Chucho Valds, Hctor Lavoe.
What do you hope to achieve with your music?
S.P.: We want to make people dance. We love the music, the culture, and the atmosphere it provides. We love playing as a band, so the only real thing we want out of it is for other people to feel the same way.
How has it been rehearsing and performing
with the group?
S.P.: Rehearsing with a 12-piece band that isn’t for credit makes it a little difficult sometimes to get everyone together. But we have a pretty good system worked out and with a weekly gig it’s pretty nice. Many of the members bring in arrangements and tunes for us to play, so we’re always learning new stuff.
M.T.: Now that we are playing regularly,
we’re trying to perfect our show. I am personally having a blast this year. I love this music, and it is always a thrill to be playing great music with great musicians.
Are you guys playing any time soon?
S.P.: Every Thursday at CasaBlanca on the Ave. next door to Se¤or Tequila’s. We’re also playing at Waverly Beach on Feb. 18, as well as a few Appleton-area school performances for multicultural days and outreach-type things.
|What should we expect to experience at a Vale Todo concert?
M.T.: Hopefully there will be an exciting
energy in the air that makes you want to dance and sing, or at the very least tap your toe.
S.P.: Some dance rhythms, some sweet solos, and a great-sounding horn section. This is a dance band, and we want to get people on the floor and have a great time.
Be sure to check out Vale Todo at http://myspace.com/valetodo for an updated list of concerts and performances.