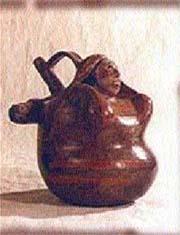 A collection of Peruvian and Meso-American ceramics that resemble this work will be on display at the Wriston galleries.
Sarah Buckley

A collection of Peruvian and Meso-American ceramics that resemble this work will be on display at the Wriston galleries.

Have you ever wanted to travel back in time? “Yes,” I’m sure some of you are thinking. “I wish that I could retake my calculus midterm.” Or, “I wish that Steve Bartman had not caught that fly ball at the Cubs game.” Ok, ok, those are both legitimate wishes, but how would you like to travel back to the Pre-Columbian era and study the artistic expressions of aboriginal tribes and cultures?

The Cubs lost, and there is no way to change that, but fortunately you can still travel back in time to see the interesting Pre-Columbian Ceramics exhibit at the Wriston Art Gallery.

The collection of artifacts was compiled by Ester Fajzi-Degroot, who is the collection’s manager at Wriston, and by Carrie Ryan, who is a senior at Lawrence double-majoring in history and anthropology.

The artifacts displayed in this exhibit originate from both ancient Peru and Meso-America, and were donated throughout the years or gathered from field work done in Mexico in the 1960s.

For example, while the socially accepted artistic expression in Peru was abstract and anonymous, the Moche approached art as a more personal form, displaying such images as animals, religious symbols, and people completing day-to-day activities.

The Meso-American pieces represented derive from what is known as the Teotihuacan culture, which was prevalent from the years 1 to 750 A.D. Because there is no record of these people ever having a specific name, and because there has never been any evidence of writing found from them, there is a hint of mystery that shrouds this culture.

Archeologists today refer to these people as Teotihuacan, although it is not widely known where this name is derived from. Archaeologists do know, however, that after the area was abandoned the Aztecs adopted it as a sacred and holy land.

Some other examples of artifacts at this exhibit are various whistles and containers, used for the functional purposes of these cultures, as well as ceremonial symbols. One is a mold of a jaguar’s head. Fajzi-Degroot explained that the jaguar is one of the most respected figures throughout Central and South America and that it is associated with magic and life.

This exhibit will be showing at the Wriston Art Center from Nov. 14 to Dec. 14. Fajzi-Degroot strongly encourages students to come to the exhibit and said that it was especially fun for her to dig through Lawrence’s collection and create interesting exhibits out of a variety of artifacts.

If this exhibit piques your curiosity, you might also want to check out professor Kuo-ming Sung’s exhibit called “Images of Tibet.” This exhibit of vivid and colorful photographs also runs from Nov. 14 to Dec. 14 at the gallery. At 6 p.m. Nov. 14 there will be a lecture followed by the opening reception.

Also running this month will be an exhibit featuring different Greek coins from the Ottilia Buerger Collection of Ancient and Byzantine Coins here at Lawrence.