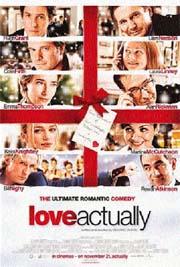 Just in time (and in fact, a little early) for the Christmas season, Love Actually tells the romantic ups and downs of no less than 10 English couples in the five weeks preceding Christmas. This is by far the best romantic comedy ever produced.

Filled with as much “aww”-inducing romance and comedy one would expect, it maintains all the good of the genre and dismisses all the bad. No fantastic serendipitous coincidences; no hopelessly drawn-out sexual tension. Since the plot is distributed between 10 separate couples, the stories move along much more quickly, eliminating all the usual ridiculousness that occupies the entire middle section between the first and last 20 minutes of most romantic films.

Moreover, the plot is more intricate than most romantic comedies. Although there are 20 main characters, all the couples are linked together, sometimes obviously, sometimes subtly. This is the distinguishing mark of Love Actually; it is able to inspire as much interest in the connective tissues of the subplot as in the individuals’ romances themselves.

The scenes move from emotionally uplifting to horribly depressing to hysterically funny with great aplomb, stitching together these drastic dramatic flip-flops seamlessly. Until Love Actually, I doubted such variety in the genre could exist.

Surprisingly, with a running time of just over two hours, the film never drags nor is the time spent in the theater even felt. In fact, I could have easily watched another hour of this superbly entertaining film.

I am somewhat annoyed that the industry released the film so early, as it is intended to be a Christmas film. I suppose, though, that if Santa already frequents the malls, the theaters should be imbued with the same early holiday spirit.

While I feel a little soft and ridiculous giving Love Actually an A, having consecutively allotted three prior, it is most definitely deserving. I can only assume that the film industry is releasing so many good fall and winter movies to make up for the horribly lackluster parade of sub-par films this past summer. A