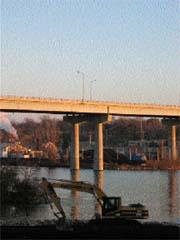 College Avenue bridge is scheduled to be expanded in 2007. A petition is circulating to give Appleton residents a direct voice regarding the reconstruction.
Beth McHenry

College Avenue bridge is scheduled to be expanded in 2007. A petition is circulating to give Appleton residents a direct voice regarding the reconstruction. (Julien Poncet)

This month, Appleton’s Common Council is slated to determine whether the College Avenue bridge will be reconstructed to four lanes or two lanes. Many citizens, however, feel that they should be allowed to make such an important decision and are organizing a petition to put the issue to a public vote.The existing College Avenue bridge suffers from structural faults and needs to be replaced. The state Department of Transportation plans on beginning construction in 2007, but they are requesting a decision from the city of Appleton as to whether the bridge will be rebuilt with two lanes, as it stands now, or expanded to four lanes of traffic.

This decision affects most Appleton residents, and has resulted in a dispute between two groups: those supporting a two-lane bridge and those advocating a four-lane bridge.

Both sides have argued for their positions. Officials of both the city and the state believe that current and future traffic congestion necessitates a four-lane bridge. Neighboring cities, such as Green Bay, have built similar four-lane bridges in past years and have seen subsequent traffic increases as an indication of the necessity for four lanes.

Many residents also feel that a larger, more industrial four-lane bridge will ruin the beauty of Appleton’s adjacent historic neighborhood. More important are the safety concerns associated with the additional traffic that a four-lane bridge would create on College Avenue.

Numerous residents are concerned that pedestrians on College Avenue, especially Lawrence students crossing near the conservatory, will be at risk due to increased traffic.

Many Appleton residents feel that the College Avenue bridge decision should be given to the citizens of Appleton, regardless of the subsequent vote. Locals have organized a petition to allow a referendum regarding the bridge.

Thus far, the petition has done well; it currently has more than 1100 signatures. In order for the petition to succeed, 3400 signatures must be collected by the end of the week. Thompson explained the concerns addressed by the petition: “We believe that the Appleton residents are more in tune with the community’s desires and needs than the current administration and city planners in regards to the bridge expansion.”

To date, Thompson has received positive responses to the petition, receiving signatures from approximately 95 percent of the people he has approached. Apparently, most of those who sign are in favor of a two-lane bridge.

According to Thompson, “The residents of Appleton expressed frustration with the city’s catering to the demands of individuals that choose to live outside of the city limits.”

The College Avenue bridge debate and the petition both affect Lawrence students directly. Expansion of the bridge to four lanes may severely increase traffic on College Avenue, the road that intersects campus and houses multiple restaurants and stores used frequently by students.

Lawrence students can register to vote at the City Government building; registered voters in the city of Appleton are eligible to sign the petition.

Students wishing to sign the petition should contact Schoenbohm of Schoenbohm and Schoenbohm Law Office, 206 Memorial Drive Appleton; Nagler at 739-8035; or Thompson at 993-9545.

Thompson suggested that students who want to become more involved should call or e-mail their alderman to express concerns. E-mail and postal addresses can be found at www.appleton.org.

Thompson adds, “We need maximum support from students in accomplishing this task.