Master and Commander is less than masterful 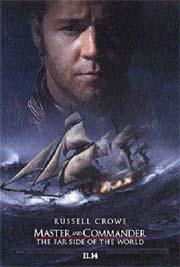 Master and Commander takes place aboard the English ship Surprise in the year 1805. The plot goes a little something like this: Captain “Lucky” Jack Aubrey (Russell Crowe) receives orders to find and either destroy or pillage a French privateer vessel. Through several skirmishes with both the French and his own crew, Aubrey fights to retain command and inspire success amid bitter defeat.

The plot is good, but not particularly well written.

The characters are likeable, but not particularly interesting.

In fact, the only truly noteworthy aspect of the film is the cinematography. Visually amazing, I can hardly believe some of the sequences the effects wizards created.

In particular, any bit involving the movement of the ship, or even the effects of the storm, displayed such commitment to making the audience actually feel as if it were likewise aboard the Surprise that one cannot help but be impressed.

My main criticism, however, lies in the fact that so many characters try to get attention throughout the movie; it was difficult to really get attached to any of them. Even Crowe’s character, which should have been over-developed, received as much attention as one of the random, lowly crewmen.

With Crowe having portrayed such extraordinary characters with such incredible ease over the past two years, I was severely disappointed that an actor with enough range to go from fearsome gladiator to schizophrenic mathematician now took on such a weakly written role.

“Lucky Jack” should have been legendary, larger than life, and yet his presence commanded little, if anything.

The only exception to this otherwise lackluster character development is Dr. Stephen Maturin (Paul Bettany). For reasons I will never understand, this is the only character the audience is made to feel any compassion for. The film devotes a large amount of time to focus on him and outfit him with more detail than even Russell Crowe.

My inner English major must acknowledge the fantastic allusion to Rime of the Ancient Mariner, when an albatross begins to follow the ship and is shot at by one of the crewmen. This scene could have been better only if the crewmen succeeded and hung the bird corpse about his neck.

While Master and Commander is quite good, it is by no means great. Unfortunate, as it hardly lacks the potential to become so.

Rather than strive for something truly extraordinary, be it in plot or characterization or even in simple mechanics, the film fails to reach for anything beyond the slightly above average work it does. B