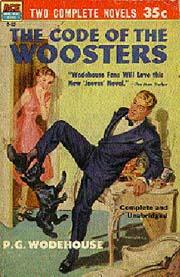 P.G. Wodehouse is one of the great humorists of the 20th century. Has there ever been a writer who has taught his readers to revel in the delights of courtship and intrigue as well as him? Is there any other author who can skewer the social classes and popular myths with as much skill and as little malice?

To paraphrase one of Wodehouse’s famous quips, “There are two ways of writing novels. The first is mine [Wodehouse’s], where you try to write a kind of musical comedy without music. The other way is to plunge deep into life without giving a damn.”

True, Wodehouse recycled the same plot for almost every one of his books. One or more couples tear through a number of humorous trials and tribulations, eventually coming together to live happily ever after by the last page. Often there is a malicious figure to put barriers in the way of their romantic bliss, and more often than not there’s some valuable object that drives the action along.

But I don’t care if the novels are formulaic. A lot of people don’t realize it, but most of the big, prizewinning novels all follow the same formula. A bunch of depressed people wallow in their own misery for several hundred pages and somebody dies at the end. I’d rather have a formula that entertains me.

Wodehouse wrote dozens of books and scores of short stories. Most of the best ones are part of a recurring series.

One of the most popular is the Blandings series, set at Blandings, a palatial country estate run by Lord Emsworth, an absent-minded aristocrat whose passion in life is raising prize pigs. He’s frequently terrorized by his domineering sister and his scheming secretary, and aided by his sympathetic butler and numerous young relations. The young people are always falling in love with individuals unfairly branded unsuitable by society.

Lord Emsworth always brings everything to a highly satisfactory conclusion, although he’s frequently unaware of what he’s doing.

If one gets tired of the usual romantic comedy formula (and if you ever do, I pity you), try the Ukridge stories, about the exploits of Ukridge, an ambitious but singularly unsuccessful con man. Ukridge refuses to violate his principles by working for his money.

He’s frequently forced to move in with his matronly romance novelist aunt due to his insolvency. He’s never short of get-rich-quick schemes, whether it involves defrauding an insurance company, inventing a fake charity, or rigging a boxing match.

But they never work. His confederates betray him, or a professional swindler tricks him, or the boxer becomes a born-again-Christian suddenly and quits the sport out of a newfound abhorrence of violence. They’re great fun.

Then there are the Golf stories, an eclectic mix of plots revolving around the members of a golf course. Golf not only brings couples together, but the sport serves as a way to unite cultures, to expose impostors, and in general save Society As We Know It. In these tales, golf is the answer to all of life’s problems. It’s an interesting perspective.

But my favorite series is the Jeeves and Wooster stories. Bertie Wooster is the frivolous playboy, often labeled as “mentally negligible,” who gets himself into one jam after another. It is only through the efforts of his brilliant and loyal manservant, Jeeves, that Bertie and his family and friends are able to get out of trouble.

Bertie hilariously narrates all of the stories. And yes, the stories all follow the same general pattern. Bertie gets roped into some kind of scheme by his friends or relatives, and he accidentally ends up getting engaged to some maddening young woman, and some loathsome bully tries to ruin Bertie’s life. Fortunately, the implacable, resourceful, Jeeves always intervenes and saves the situation.

So what if the outline is always the same? There’s always hilarious dialogue and wonderful characterizations that are unique to each tale.

Wodehouse is a comedian, but he doesn’t find his humor in crudeness or easy targets. No one satirizes high society with as much good-heartedness as he does. No one else so persuasively argues that all decent people deserve a happy ending.

Wodehouse became an institution through his humor and humanity in an age when writers were applauded for being dark and depressing. Every now and then we need to look at the world through Wodehouse’s eyes. 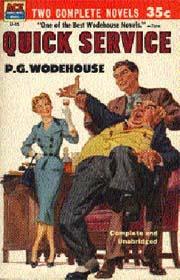