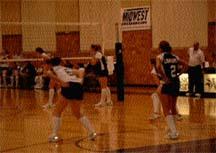 The Lawrence University Volleyball team split a pair of matches against Northern Division opponents this past week. The Vikings dropped a match to St. Norbert 3-2, but came back to blank Beloit 3-0.The Vikings played a tough five set match against the Green Knights. The Vikings won the first game before dropping the next two.

In game four, LU came back to win 30-25. That set up a game five, which belonged to St. Norbert. The Green Knights won the fifth and deciding game 15-4.

The Vikings had three players in double figures in kills. Jenny Burris had 11, Shannon Arndt had 21, and Lis Pollock led the Vikings with 23. Pollock ended the match with an impressive attack percentage of 47 percent.

In the match against Beloit, the Vikings completely took over. They swept the Buccaneers away in three games, 30-18, 30-23, and 30-19. Emily Stengel had a great match for the Vikings. She finished with 13 kills and an attack percentage of 62 percent. Pollock again was the leader in kills with 14.

The Vikings will host Ripon at home on Saturday at 3:00 p.m. in Alexander Gym.